We are not referring here to the storied concrete Colosseum in Rome, which was completed in 80 A.D. and remains famous for its ancient gladiatorial spectacles. We are talking here about DARPA’s Colosseum, a next-generation electronic emulator of the invisible electromagnetic world. Though it resides in a mere 30-foot by 20-foot server room on the campus of the Johns Hopkins University Applied Physics Laboratory (APL) in Laurel, MD, the Colosseum is capable of creating a much larger, and critically important wireless world. If all goes as planned during the Agency’s three-year Spectrum Collaboration Challenge (SC2), competitors vying for $3.75 million in prize money will use the Colosseum—which today became fully accessible to them for the first time—as a world-unique testbed to create radically new paradigms for using and managing access to the electromagnetic spectrum in both military and civilian domains. 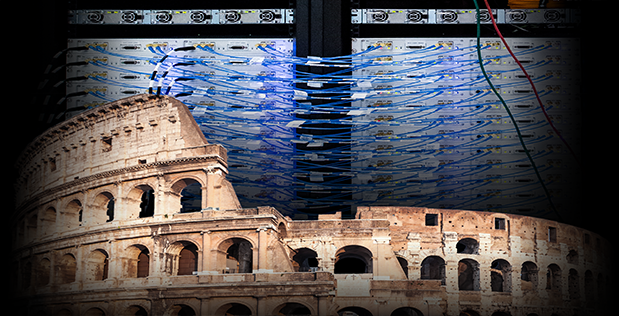 “The Colosseum is the wireless research environment that we hope will catalyze the advent of autonomous, intelligent, and—most importantly, collaborative—radio technology, which will be essential as the population of devices linking wirelessly to each other and to the internet continues to grow exponentially,” said SC2 program manager Paul Tilghman. Traditional wireless communications systems are defined by a specification—a document that is the product of years of study and debate, and prescribes precisely how a radio system will work and how, if at all, it will get along with other radios. “We are asking SC2 competitors to devise fundamentally new radio systems that can learn from each other in real-time, making the need for arduous radio specifications obsolete,” Tilghman said.

That’s a significant technical challenge in itself, but it carries with it the challenging need to develop a testbed that can put those radios through a set of realistic paces.“Traditional radio systems are designed to ensure they operate only in pre-programmed ways, so it’s perfectly acceptable to test them in relatively small numbers and in simple environments,” Tilghman said. “By contrast, SC2 is asking a group of radios that weren’t designed to work together to learn how to optimize spectrum capacity in real-time, and is relying on artificial intelligence to find and take advantage of ‘gaps’ and other opportunities to increase efficiency. You can’t satisfactorily learn how to solve this puzzle unless you address it at scale, and that’s why the Colosseum is such a critical part of the solution.”

On the surface, DARPA’s Colosseum appears as a drab set of electronic racks. Yet it is a path-breaking testbed that can emulate tens of thousands of possible interactions among hundreds of wireless communication devices—including cell phones, military radios, Internet-of-Things devices, and a litany of others—operating simultaneously in a square-kilometer expanse. That’s an area some 40 times that of the Roman Colosseum’s six acres. DARPA’s Colosseum amounts to an artificial, high-fidelity holodeck that can simulate invisible, fast-as-light communication signals traversing, ricocheting, echoing, and otherwise making their way from transmitters to receivers wherever they might be in a wide variety of simulated environments. Said Tilghman, “The Colosseum can make the radios believe they are operating in an open field, a dense city, a suburban shopping mall, a desert, or any other scenario you can dream up.”

Engineers at APL assembled the Colosseum with 128, two-antenna, software defined radio (SDR) units built by National Instruments (NI). Emulating electromagnetic waves from these radios traversing the physical world is no small task. To tackle this, APL partnered with NI to put 64 field programmable gate arrays (FPGAs) to the task. The FPGAs enable the Colosseum to make the SDRs behave as though they are operating in any of countless environments, each designed like an electromagnetic movie set.

Among the toughest challenges of the testbed’s design has been the integration of leading-edge SDR technology with a cloud-computing-like environment, remotely accessible by multiple teams—30 of them for SC2’s first preliminary event this coming December—whose diverse AI and SDR frameworks need to be implemented simultaneously in the same testbed. “Putting such a powerful wireless testbed into the cloud is a first-of-its-kind achievement in and of itself,” Tilghman said, “but the most exciting thing will be to see the rapid evolution of how AI solves wireless communications challenges once the competitors have this unique and powerful resource at their disposal.”

By the numbers, the Colosseum testbed is a 256-by-256-channel RF channel emulator, which means it can calculate and simulate in real-time more than 65,000 channel interactions among 256 wireless devices. Each simulated channel behaves as though it has a bandwidth (information content) of 100 MHz, which means the testbed supports 25.6 GHz of bandwidth in any instant. Moreover, each channel’s transmission and reception frequency is tunable between 10 MHz (as in broadcast FM radio) and 6 GHz (as in WiFi). The amount of digital RF data coursing through the Colosseum each second, more than 52 terabytes, exceeds the estimated amount of information contained in the entire print collection of the Library of Congress. In short, said Tilghman, “the Colosseum is a magnificent electronic arena and just what we and the SC2 teams need for testing innovative, collaborative, intelligent radios against one another and, ultimately, to discover how to eke more capacity from the frustratingly finite spectrum.”