Researchers at the University of Illinois have found a way to apply self-healing technology to lithium-ion batteries to make them more reliable and last longer.

The group developed a battery that uses a silicon nanoparticle composite material on the negatively charged side of the battery and a novel way to hold the composite together – a known problem with batteries that contain silicon. 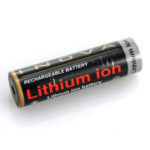 “This work is particularly new to self-healing materials research because it is applied to materials that store energy,” White said. “It’s a different type of objective altogether. Instead of recovering structural performance, we’re healing the ability to store energy.”

The negatively charged electrode, or anode, inside the lithium-ion batteries that power our portable devices and electric cars are typically made of a graphite particle composite. These batteries work well, but it takes a long time for them to power up, and over time, the charge does not last as long as it did when the batteries were new.

“Silicon has such a high capacity, and with that high capacity, you get more energy out of your battery, except it also undergoes a huge volume expansion as it cycles and self-pulverizes,” Sottos said.

Past research found that battery anodes made from nanosized silicon particles are less likely to break down, but suffer from other problems.

“You go through the charge-discharge cycle once, twice, three times, and eventually you lose capacity because the silicon particles start to break away from the binder,” White said.

To combat this problem, the group further refined the silicon anode by giving it the ability to fix itself on the fly. This self-healing happens through a reversible chemical bond at the interface between the silicon nanoparticles and polymer binder.

“This dynamic re-bonding process essentially holds the silicon particles and polymer binder together, significantly improving the long-term performance of the electrode,” Sottos said.

The researchers tested their new battery against one that does not use the reversible chemical bonding and found that it retains 80 percent of its initial capacity, even after 400 cycles.

These batteries also have a much higher energy density, meaning that they can store more electricity than a graphite-anode battery of the same size.

“The higher the energy density, the better. The other option is to add more batteries, but that gets heavy and is an issue with electric cars, in particular,” Sottos said.

Future studies will include looking at how this self-healing technology can work with solid-state batteries, the researchers said. Reports of fires and explosions caused by the liquids in lithium-ion batteries are urging scientists to move in this direction.