“Touch is a common way to interact with electronics using keyboards and touch screens,” says Michael Dickey, a professor of chemical and biomolecular engineering at NC State and corresponding author of a paper describing the work. “We have created soft and stretchable fibers that can detect touch, as well as strain and twisting. These microscopic fibers may be useful for integrating electronics in new places, including wearable devices.” 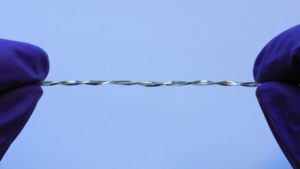 The new fibers are made of tube-like polymer strands that contain a liquid metal alloy, eutectic gallium and indium (EGaIn). The strands are only a few hundred microns in diameter, which is slightly thicker than a human hair.

The touch-responsive fiber works because of capacitance, or the phenomenon in which electric charge is stored between two conductors separated by an insulator. For example, when your finger (which is a conductor) touches the screen of your smartphone (which is an insulator), it changes the capacitance between your finger and the electronic material beneath the screen. The smartphone’s technology then interprets that change in capacitance as a command to open an app or to type on the keypad.

This effectively gives you the ability to send different electronic signals depending on which part of the fiber you touch.

The researchers also developed a sensor using two polymer strands, both of which are completely filled with EGaIn.

Again, the strands are twisted into a tight spiral. Increasing the number of twists elongates the elastic strands and brings the EGaIn in the two tubes closer together. This changes the capacitance between the two strands.

“We can tell how many times the fiber has been twisted based on the change in capacitance,” Dickey says. “That’s valuable for use in torsion sensors, which measure how many times, and how quickly, something revolves. The advantage of our sensor is that it is built from elastic materials and can therefore be twisted 100 times more – two orders of magnitude – than existing torsion sensors.”

The paper, “Stretchable Capacitive Sensors of Torsion, Strain, and Touch Using Double Helix Liquid Metal Fibers,” is published in the journal Advanced Functional Materials. Lead author of the paper is Christopher Cooper, an undergraduate at NC State. The paper was co-authored by Kuralamudhan Arutselvan, Daniel Armstrong, Yiliang Lin, and Mohammad Rashed Khan, who are Ph.D. students at NC State; by Ying Liu, a postdoctoral researcher at NC State; and by Jan Genzer, the S. Frank and Doris Culberson Distinguished Professor of Chemical and Biomolecular Engineering at NC State. The work was supported by Army Natick under grant number W911QY-14-C-0033.