The “3D Human Body Reconstruction (3DHBR)” technology of the Fraunhofer Heinrich Hertz Institute HHI is being used for the first time in cooperation with UFA GmbH in the course of a joint test production for the immersive film “GATEWAY TO INFINITY” as a volumetric virtual reality experience.

This innovative reconstruction method makes it possible to generate dynamic 3D models of people that appear natural, going far beyond the conventional anima-tion of virtual characters. In this test production, the 3D models were created based on real actors so that gestures, facial expressions and textures (skin, hair and fabric) could be recorded in detail. This made the lifelike reconstruction of facial expressions and moving clothing possible. The 3D models of people were subsequently integrated into a virtual scene. Viewers with virtual reality glasses can therefore view these virtualised people at very close range and from various perspectives. Thus the viewer is immersed directly in the scene, experiencing the story close up and personally. This level of immersion and virtual experience is entirely new. 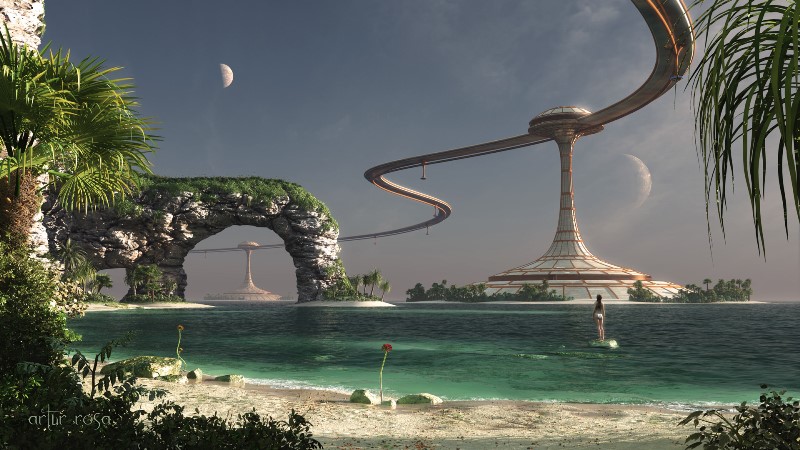 The Fraunhofer HHI cooperated with UFA for the test production in order to set a milestone in the development of immersive film and transport emotions into a virtual world. This partnership is also aimed at developing a professional produc-tion process that makes it possible to generate dynamic 3D models of high quali-ty quickly. The huge volumes of data for a volumetric film are recorded with a number of especially constructed cameras, posing new challenges for the exploi-tation chains in production.
The Fraunhofer Heinrich Hertz Institute is planning to build a fully functional VR production studio for “3D Human Body Reconstruction (3DHBR)” starting in mid-2017. This test production with the UFA is an important milestone along the way for the Fraunhofer HHI.

The joint test VR production “GATEWAY TO INFINITY” was produced in English for the international market. Viewers can immerse themselves in a science fiction world on a foreign planet. The joint test production is being presented at the Fraunhofer exhibition booth 6110, South Upper Hall at the NAB Show 2017 from April 22 to 27 in Las Vegas.