In addition, women account for a little over one quarter of board members of publicly listed companies in the EU
(27%), and for less than one fifth of senior executives (17%) in 2018. In other words, although representing approximately half of all employed persons in the EU, women continue to be under-represented amongst managers. 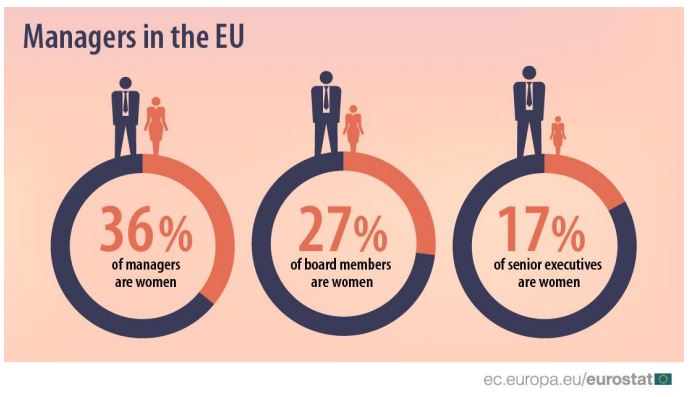 Managers are mostly women only in Latvia
The largest share of women among managerial positions is recorded in Latvia (56%), the only Member State where women are a majority (56%) in this occupation. It is followed by Bulgaria and Estonia (both 49%), Poland and Slovenia (both 47%), Hungary (43%), Lithuania and Sweden (both 42%), Ireland (41%), and Slovakia (40%).

At EU level, about a third (36%) of managers are women. This share remained stable since 2012 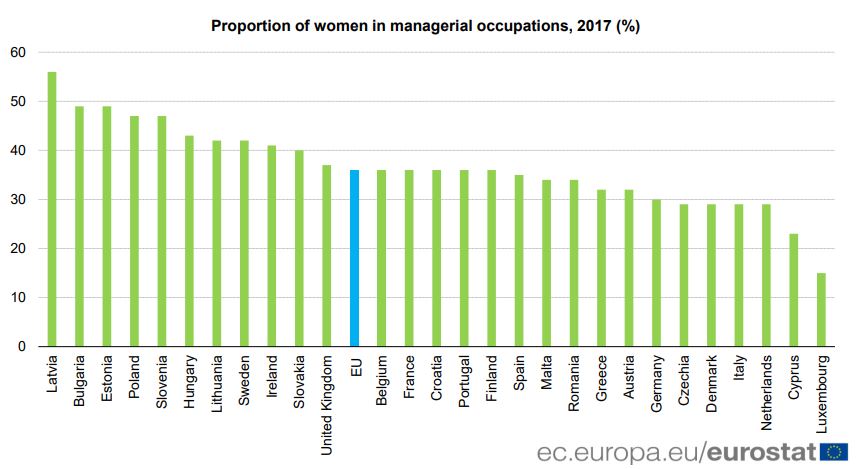 The largest share of female board members in the largest publicly listed companies is recorded in France (44%),
followed by Italy and Sweden (both 36%), Finland (35%), and Germany (34%). 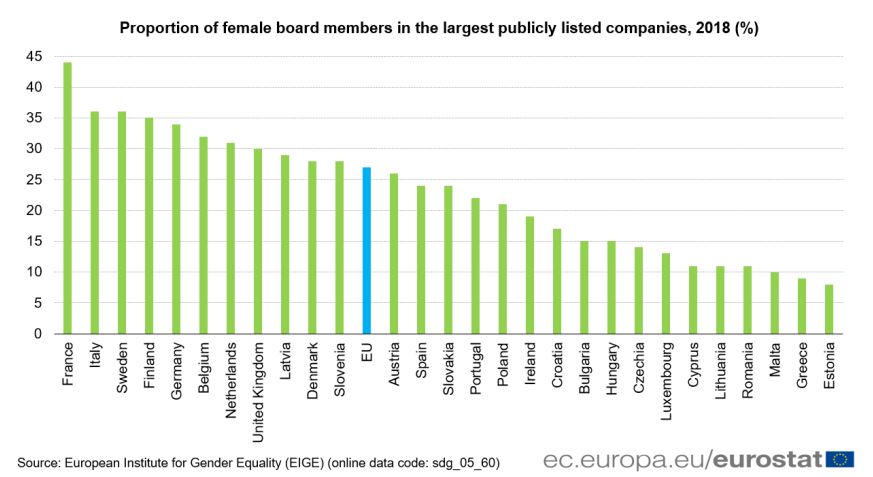 Among EU Member States, women account for over a quarter of senior executives in the largest publicly listed
companies in Lithuania (28%), followed by Bulgaria and Latvia (both 27%), as well as in Romania (25%). 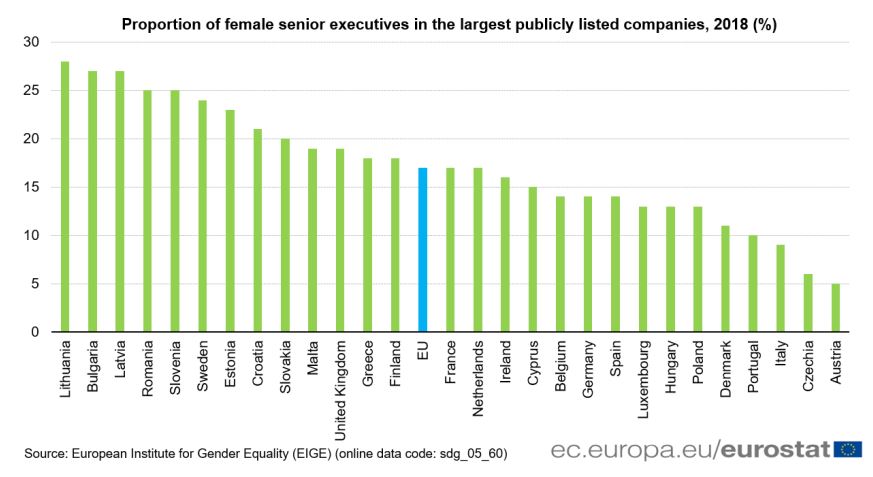 Methods and definitions
The Labour Force Survey (LFS) is a large sample survey among private households. LFS data refer to the resident population, aged 15 – 64 years old, and therefore LFS results relate to the persons resident in the country irrespective of the country where those persons work. This difference may be significant in countries with large cross-border flows. For further information, please consult the Eurostat EU-LFS publication. Annual results presented in this news release are calculated as the average of quarterly results.

Managerial positions are defined according to the International Standard Classification of Occupations (ISCO-08), which is managed by the International Labour Organisation (ILO). Managers plan, direct, coordinate and evaluate the overall activities of enterprises, governments and other organizations, or of organizational units within them, and formulate and review their policies, laws, rules and regulations. The source of data is LFS.

Board members cover all members of the highest decision-making body in each company (i.e. chairperson, non-executive directors, senior executives and employee representatives, where present). The highest decision-making body is usually termed the supervisory board (in case of a two-tier governance system) or the board of directors (in a unitary system).

Executives refer to senior executives in the two highest decision-making bodies of the largest (max. 50) nationally registered companies listed on the national stock exchange. The two highest decision-making bodies are usually referred to as the supervisory board and the management board (in case of a two-tier governance system) and the board of directors and executive/management committee (in a unitary system). The source of data on female executives is the European Institute for Gender Equality (EIGE). Data cover all persons occupying specified positions in the organisational units covered.

Publicly listed companies means that the shares of the company are traded on the stock exchange. The largest companies are taken to be the members (max. 50) of the primary blue-chip index, which is an index maintained by the stock exchange and covers the largest companies by market capitalisation and/or market trades. Only companies which are registered in the country concerned are counted. The source of data on female board members in the largest publicly owned companies is the European Institute for Gender Equality (EIGE). Data cover all persons occupying specified positions in the organisational units covered.

For more information
Eurostat website section dedicated to gender based indicators
Eurostat database on gender equality
Eurostat news article on women in national parliaments and governments, women in science, and gender employment gap
Eurostat Statistics Explained article on gender statistics
Themes in the Spotlight page with a set of EU and country infographics and an interactive visualisation on statistics
The European Institute for Gender Equality (EIGE) database
The UN website dedicated to the International Women’s Day