An international team has shed light onto interactions between nanodiamonds and water molecules. Experiments at synchrotron sources showed how hydrogenated groups on nanodiamond surfaces change the network of hydrogen bonds in the aqueous environment and may potentially influence the catalytic properties of nanodiamonds, for instance for the production of solar fuels from CO2 and light.

You think, diamonds are shiny, transparent and will sink in water? Well, it depends. Diamonds change a lot when they become really tiny: nanodiamonds with diameters of some 10-9 m tend to form a black and oily shimmering dispersion in water, a colloid. Such nanodiamonds in water have a wide variety of applicationsin medicine, chemistry and as metal-free catalysts for solar fuel production from CO2. 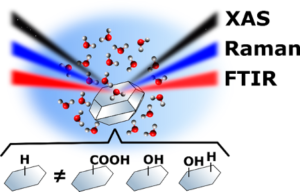 Nanodiamonds have been modified by attaching different molecules. Credit: HZB

The nanoparticle−water interface plays a central role in many applications: it affects the colloidal stability, the optical properties and the chemical and catalytic reactivity of the nanoparticles. What happens exactly at the interface between nanodiamonds and water molecules was up to now largely unknown.

Now, an international cooperation of Russian, Japanese, American, French and German science institutes has shed light onto the interactions of nanodiamonds and water molecules. With a combination of spectroscopic methods at synchrotron lightsources BESSY II in Berlin and, UVSOR III in Japan, they analysed the interactions between water molecules and nanodiamonds. To this goal they modified the nanodiamond’s surface with different molecular groups, attaching hydrogen (-H), carboxyl groups (-COOH), hydroxyl groups (–OH), and other polyfunctional surface terminations.

Surface terminations had a strong influence on the hydrogen bond networks, they observed. Whereas only slight modifications were observed for oxidized surfaces, hydrogenated nanodiamonds dramatically modified the water hydrogen bond network. “Hydrogenated groups induce a long-range disordering of water molecules around nanodiamonds and hydrogen-bonds between these water molecules are weaker than those found in bulk water”, HZB-scientist Dr. Tristan Petit explains.  The scientists propose that the water rearrangement is due to the accumulation of electrons at the diamond-water interface, which could be of particular interest for (photo)catalytic applications, i.e. for the production of solar fuels, from carbon dioxide and light.