Physicists at LMU have developed a novel nanotool that provides a facile means of characterizing the mechanical properties of biomolecules. 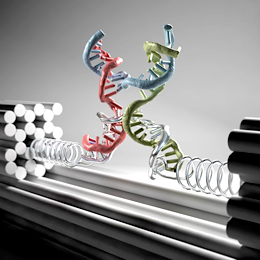 Faced with the thousands of proteins and genes found in virtually every cell in the body, biologists want to know how they all work exactly: How do they interact to carry out their specific functions and how do they respond and adapt to perturbations? One of the crucial factors in all of these processes is the question of how biomolecules react to the minuscule forces that operate at the molecular level. LMU physicists led by Professor Tim Liedl, in collaboration with researchers at the Technical University in Braunschweig and at Regensburg University, have come up with a method that allows them to exert a constant force on a single macromolecule with dimensions of a few nanometers, and to observe the molecule’s response. The researchers can this way test whether or not a protein or a gene is capable of functioning normally when its structure is deformed by forces of the magnitude expected in the interior of cells. This new method of force spectroscopy uses self-assembled nanoscopic power gauges, requires no macroscopic tools and can analyze large numbers of molecules in parallel, which speeds up the process of data acquisition enormously.

With their new approach, the researchers have overcome two fundamental limitations of the most commonly used force spectroscopy instruments. In the case of force microscopy and methodologies based on optical or magnetic tweezers, the molecules under investigation are always directly connected to a macroscopic transducer. They require precise control of the position of an object – a sphere or a sharp metal tip on the order of a micrometer in size – that exerts a force on molecules that are anchored to that object. This strategy is technically extremely demanding and the data obtained is often noisy. Furthermore, these procedures can only be used to probe molecules one at a time. The new method dispenses with all these restrictions. “The structures we use operate completely autonomously“, explains Philipp Nickels, a member of Tim Liedl’s research group. “And we can use them to study countless numbers of molecules simultaneously.”

The members of the Munich group, which is affiliated with the Cluster of Excellence NIM (Nanosystems Initiative Munich), are acknowledged masters of “DNA origami”. This methodology exploits the base-pairing properties of DNA for the construction of nanostructures from strands that fold up and pair locally in a manner determined by their nucleotide sequences. In the present case, the DNA sequences are programmed to interact with each other in such a way that the final structure is a molecular clamp that can be programmed to exert a defined force on a test molecule. To this end, a single-stranded DNA that contains a specific sequence capable of recruiting the molecule of interest spans from one arm of the clamp to the other. The applied force can then be tuned by changing the length of the single strand base by base. “That is equivalent to stretching a spring ever so-o-o slightly,” says Nickels. Indeed, by this means it is possible to apply extremely tiny forces between 1 and 15 pN (1 pN = one billionth of a Newton) – comparable in magnitude to those that act on proteins and genes in cells. “In principle, we can capture any type of biomolecule with these clamps and investigate its physical properties,” says Tim Liedl.

The effect of the applied force is read out by taking advantage of the phenomenon of Förster Resonant Energy Transfer (FRET). “FRET involves the transfer of energy between two fluorescent dyes and is strongly dependent on the distance between them.” explains Professor Philip Tinnefeld from TU Braunschweig. When the force applied to the test molecule is sufficient to deform it, the distance between the fluorescent markers changes and the magnitude of energy transfer serves as an exquisitely precise measure of the distortion of the test molecule on the nanometer scale.

Together with Dina Grohmann from Universität Regensburg, the team has used the new technique to investigate the properties of the so-called TATA Binding Protein, an important gene regulator which binds to a specific upstream nucleotide sequence in genes and helps to trigger their expression. They found that the TATA protein can no longer perform its normal function if its target sequence is subjected to a force of more than 6 pN. – The new technology has just made its debut. But since the clamps are minuscule and operate autonomously, it may well be possible in the future to use them to study molecular processes in living cells in real time.