The Canadian Space Agency (CSA) is awarding a new contract to Carré Technologies (Hexoskin) to continue advancing technology on Astroskin, an innovative bio-monitoring system for use aboard the International Space Station (ISS). The announcement will be made today at the company’s headquarters in Montreal by the honourable Marc Garneau, Minister of Transport of Canada and first Canadian in space, and Canadian astronaut David Saint-Jacques. Consisting of a “smart shirt” and remote health monitoring software, Astroskin will collect valuable scientific data on astronauts’ vital signs, sleep quality and activity levels during their missions. CSA Astronaut David Saint-Jacques will test Astroskin during his six-month mission aboard the ISS in 2018-2019. 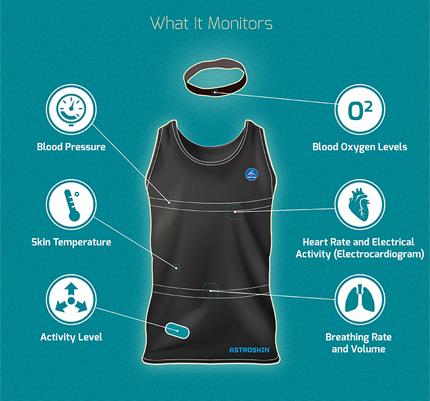 “Astroskin is a perfect example of how our government works with small, innovative, Canadian businesses on space technologies that lead to commercial versions for use by Canadians.”

“Astroskin may have many applications on Earth, such as medical monitoring of those confined to their homes by illness, people living in remote areas with limited medical access, and those working in hazardous environments. It is another in a long list of space technologies brought down to Earth for all of us.”

“Our team is proud of the role we are playing to support human space travel. One day, thousands of space travelers bound for Mars will need simple reliable medical systems to ensure their health. Deploying our wearable sensors and software to the ISS is significant as this represents the ultimate remote patient monitoring scenario. The findings from tracking the health of astronauts will be used to make our healthcare system more accessible and support new home care and telemedicine services.”

About Hexoskin Hexoskin is the world leader in smart clothing for health monitoring. Hexoskin smart shirts are used by space and defense agencies, sports scientists, and thousands of health professionals and health researchers all over the world. The Hexoskin connected platform provides a new, convenient way to understand human health in real-life environments. For more information, visit www.hexoskin.com.