The spread of the Internet is shaping migration in profound ways. A McGill-led study of over 150 countries links Internet penetration with migration intentions and behaviours, suggesting that digital connectivity plays a key role in migration decisions and actively supports the migration process. 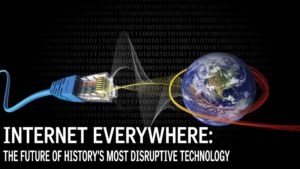 Countries with higher proportions of Internet users tend to have more people who are willing to emigrate. At the individual level, the association between Internet use and intention to migrate is stronger among women and those with less education. The same result was found for economic migrants compared to political migrants, according to the team of international researchers from McGill University, University of Oxford, University of Calabria, and Bocconi University.

“The digital revolution brought about by the advent of the Internet has transformed our societies, economies, and way of life. Migration is no exception in this revolution,” says co-author Luca Maria Pesando, an Assistant Professor in the Department of Sociology and Centre on Population Dynamics at McGill University.

In the study, published in Population and Development Review, the researchers tracked Internet use and migration pathways with data from the World Bank, the International Telecommunication Union, the Global Peace Index, the Arab Barometer, and the Gallup World Poll, an international survey of citizens across 160 countries.

Their findings underscore the importance of the Internet as an informational channel for migrants who leave their country in search of better opportunities. Unlike political migrants, who might be pushed, for example, by the sudden explosion of a civil conflict, economic migrants’ decisions are more likely to benefit from access to information provided by the Internet, and more likely to be shaped by aspirations of brighter futures in their destination countries.

“The Internet not only gives us access to more information; it allows us to easily compare ourselves to others living in other – often wealthier – countries through social media,” says Pesando.

Looking at migration data in Italy – a country that has witnessed sizeable increases in migrant inflows over the past two decades – the researchers found a strong correlation between Internet use in migrants’ countries of origin, and the presence of people from that country in the Italian population register in the following year. Tracking migrants including asylum seekers and refugees passing through the Sant’Anna immigration Centre in Calabria, the researchers also found a link between migrants’ digital skills and knowledge of the Internet and voluntary departure from the Centre in search of better economic opportunities.

“Our findings contribute to the growing research on digital demography, where Internet-generated data or digital breadcrumbs are used to study migration and other demographic phenomena,” says Pesando. “Our work suggests that the Internet acts not just as an instrument to observe migration behaviors, but indeed actively supports the migration process.”

As next steps, the research team, which includes Francesco Billari of Bocconi University and Ridhi Kashyap and Valentina Rotondi of University of Oxford, will explore how digital technology and connectivity affect social development outcomes, ranging from women’s empowerment to reproductive health and children’s wellbeing across generations.

“The Internetization of International Migration” by Luca Maria Pesando, Valentina Rotondi, Manuela Stranges, Ridhi Kashyap, and Francesco C. Billari was published in Population and Development Review. The research was supported by the European Research Council (ERC) grant on “Discontinuities in Household and Family Formation.

Founded in Montreal, Quebec, in 1821, McGill University is Canada’s top ranked medical doctoral university. McGill is consistently ranked as one of the top universities, both nationally and internationally. It?is a world-renowned?institution of higher learning with research activities spanning two campuses, 11 faculties, 13 professional schools, 300 programs of study and over 40,000 students, including more than 10,200 graduate students. McGill attracts students from over 150 countries around the world, its 12,800 international students making up 31% of the student body. Over half of McGill students claim a first language other than English, including approximately 19% of our students who say French is their mother tongue.