Small magnetic fields from the human body can usually only be picked up by very sensitive superconducting magnetic field sensors that have to be cooled by liquid helium to near absolute zero (which is minus 273 degrees Celsius). But now researchers from the Niels Bohr Institute at the University of Copenhagen have developed a much cheaper and more practical optical magnetic field sensor that even works at room temperature or at body temperature.

“The optical magnetic field sensor is based on a gas of caesium atoms in a small glass container. Each caesium atom is equivalent to a small bar magnet, which is affected by external magnetic fields. The atoms and thus the magnetic field are picked up using laser light. The method is based on quantum optics and atomic physics and can be used to measure extremely small magnetic fields,” explains Kasper Jensen, assistant professor in the Center for Quantum Optics, Quantop at the Niels Bohr Institute at the University of Copenhagen. 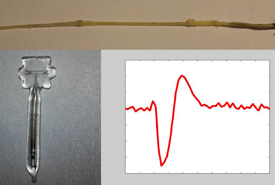 The researchers at the Niels Bohr Institute have been developing the sensitive magnetic field sensor for several years in the Quantum research group laboratories.

The magnetic field sensor itself consists of a glass container, which has a channel that is approximately 1cm long and 1 mm wide. At the bottom of the glass container is caesium metal. Caesium evaporates into gas at room temperature and the gas atoms rise up into the small channel in the sensor head. Each caesium atom rotates around itself and the axis is like a tiny bar magnet. Now the sensor is held close to a nerve, which emits an electrical nerve pulse. The electrical pulse has a magnetic field that causes a change in the tilt of the axes of the caesium atoms and by sending a laser beam through the gas, you can read the ultra-small magnetic fields of the nerve signals.

The laboratory tests, which were carried out in collaboration with researchers from the Faculty of Health and Medical Sciences, have shown that you can use the magnetic field sensor to detect the magnetic fields from the electrical impulses from the nervous system. The tests were done on the sciatic nerve from a frog, which in many ways resemble the nerves in the human body. For practical reasons, the nerve was removed from the frog before the tests, but it is also possible to pick up electrical impulses from live frogs or from humans.

The advantage of the optical sensor is precisely that the magnetic fields and electrical impulses can be safely and easily picked up at a distance of a few millimetres or centimetres – without the sensor actually coming into contact with the body.

“We expect that the sensor will be used for special medical examinations, where it is important for the sensor not to be directly in contact with the body, for example, for diagnosing heart problems in tiny foetuses. Here the magnetic field sensor is placed on the mother’s abdomen and you can easily and safely detect the heartbeat of the foetus and you will be able to diagnose any heart problems at an early stage so that the foetus can get the right treatment quickly,” explains Eugene Polzik, professor and head of Quantop at the Niels Bohr Institute.

Eugene Polzik explains that you can calculate the speed at which the nerve impulses are moving from the measured signals. There are a large number of diseases where the nerves are damaged, for example, multiple scleroses, where the nerve impulses move more slowly than in people who are not ill. Other issues could, for example, be a number of eye diseases where you will be able to make the diagnosis without having to put electrodes on the eye or Alzheimer’s, where you will be able to measure the electrical signals in specific nerve pathways.