NASA’s James Webb Space Telescope and Space Launch System (SLS) rocket were named 2022 TIME Inventions of the Year. NASA led the international Webb partnership with ESA (European Space Agency) and CSA (Canadian Space Agency). The agency’s SLS rocket, the world’s most powerful rocket, is designed to send humans to the Moon on Artemis missions for the benefit of humanity. TIME made the announcement Thursday, Nov. 10. 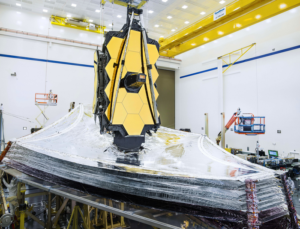 “We designed the Webb observatory to see the first lights that turned on in our universe.  When I saw the first images released, I was struck with awe, wonder, and the satisfaction of knowing that whatever is out there, Webb will see it,” said Mike Menzel, NASA mission systems engineer for Webb at NASA’s Goddard Space Flight Center in Greenbelt, Maryland. TIME named Webb a Best Invention in the “Design” category.

The SLS rocket is planned to launch on its first flight test for the Artemis I mission, Wednesday, Nov. 16, to send an uncrewed Orion spacecraft around the Moon and back to Earth to thoroughly test systems before missions with astronauts. SLS is the only rocket capable of launching humans in Orion along with their supplies to the Moon and beyond. TIME named SLS a Best Invention in the “Experimental” category.

“We will demonstrate the capability of the Space Launch System Moon rocket, the largest rocket NASA has built since the Saturn V, on the Artemis I mission,” said John Honeycutt, SLS program manager at NASA’s Marshall Space Flight Center in Huntsville, Alabama. “The heavy-lift rocket’s innovative design allows it to evolve and become even more powerful so that it can carry both astronauts and large cargos on increasingly more complex missions to the Moon and Mars.”

Launched Dec. 25, 2021, from French Guiana, the Webb telescope has already been uncovering previously unseen views and hidden secrets of the universe. Webb has seen early galaxies, provided a new look at planets in our own solar system, and peered through dusty clouds to see stars forming, such as in the Pillars of Creation.

With its unprecedented power and capabilities, the SLS rocket provides the foundation for NASA’s Artemis missions to the Moon. SLS makes it possible to launch the Orion spacecraft, which is built in partnership with ESA, on missions to the Moon that will provide the knowledge for humans to travel to Mars. SLS is built with a combination of proven systems and innovative manufacturing. To fulfill America’s future needs for deep space missions, SLS will evolve into increasingly more powerful configurations.

SLS is America’s rocket and more than 1,000 companies in 45 states contributed to the rocket managed by Marshall, which oversees the work by lead contractors Boeing, Notrthrop Grumman, Aerojet Rocketdyne and other companies. Currently, NASA and its industry partners are in the process of building rockets for four more Artemis missions. All NASA Centers have played a role in the Artemis missions, which are launching a new era of human deep space exploration.

For more information about the Webb mission, visit:

For more information about the SLS rocket mission, visit: