There are more than enough news items about self-driving cars. Still, the actual introduction of them onto the road is not going smoothly. Incidents during test situations have led to questions about their reliability but other issues also play a role in the acceptance of self-driving cars. Berfu Ünal, from the UG/Campus Fryslân and UG department of Psychology, is conducting research into this. Despite all of the scepticism, she is convinced that someday, we will be quietly reading while whizzing over the asphalt. 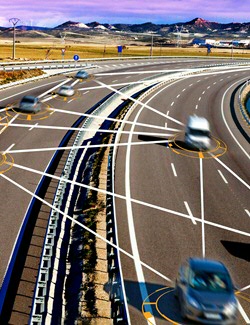 Berfu Ünal and her colleagues are researching the acceptance of ‘connected self-driving vehicles’. ‘If we have self-driving cars, then it is important that they mutually share data, for example on speed, turning or braking. If they communicate, they can then also respond to one another. That is why we are using the word “connected”. Indeed, this sort of system would probably be safer in practice than just one self-driving car amidst “normal” cars.’

Due to practical constraints, Ünal is only looking at acceptability for the time being. ‘Acceptability is about the willingness of people to embrace a new product in advance. This is in contrast to “acceptance”, which is a behavioural change that occurs at the moment that something becomes real.’ Meanwhile, she has inventoried all sorts of previous studies into the acceptability of self-driving cars by drivers but also by passengers, pedestrians and the elderly. As expected, some are more open to the cars of the future than others. ‘Usually, “technology geeks”, men and people with disabilities are fairly positive about self-driving cars. The latter group, for example, are positive because they expect that this development will provide them with more opportunities and will expand their world,’ explains Ünal.

Why wouldn’t you be positive?

What strikes Ünal is that many previous studies mapped who was positive about self-driving cars but none of them actually looked into why they were positive. In her opinion, this is an essential question. ‘If you know why people are for or against self-driving cars, you can take this into account when designing or introducing them. Many things could play a role in this: ideas about freedom, the enjoyability of driving, safety, the feeling of control and the status that such a car can give you.’ At a later stage, Ünal and her colleagues will conduct tests in a closed circuit, where they will gradually adapt the situation bit by bit. They will then be able to see if anything changes in acceptability and what the cause of this is.

The fact that a lot still has to change before self-driving cars can really dominate the streets is quickly apparent from Ünal’s words. This is because infrastructure has to be arranged, clarity about who takes responsibility in accident cases has to be worked out and the role of the policy may change, and so on. Still, Ünal is firmly convinced that the day will come when we allow ourselves to relax and be driven by an automatic chauffeur. ‘Every big change is first accompanied by scepticism or resistance. It brings uncertainty about our lives, wellbeing and autonomy. People often only change their minds when innovations really become part of our lives.’

When asked about her motivation for conducting this research, Ünal starts to beam. ‘It is fantastic that we are a part of this wave of innovation. We are true pioneers.’ She does have one wish for the near future: to sit in a self-driving car some time. ‘I’d find that really special! Until now, I haven’t gone beyond sitting in a “self-driving” simulator.’ For the time being, Ünal will have to make do with the self-driving shuttle bus at the airport.

Berfu Ünal is an environmental psychologist. Among other things, she is conducting research at the UG/Campus Fryslân as part of the EU-funded SUaaVE project (www.suaave.eu). In the SUaaVE project, 10 institutes within Europe are researching the acceptability of self-driving vehicles.