Thanks to a chance discovery, the world has a new superweapon in the fight against oil and chemical spills. It is a synthetic wax engineered by Günter Hufschmid and his team at German company Deurex. It can adsorb close to seven times its own weight in hydrophobic liquids without taking on any water itself, making it an ideal tool for cleaning up spills and leaks wherever they occur – whether it’s on the floor of a mechanic’s garage or around an oil-drilling platform at sea. 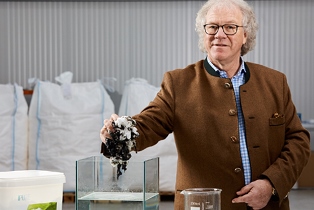 Conventional binding materials exist, but they typically take longer to soak up fewer contaminants. Some leave behind chemical residues and most can never be reused. Hufschmid’s invention, which he calls “Pure”, does a better job at every turn. It’s incredibly adsorbent and fast-acting, plus it doesn’t cause any messy side-effects and once it has done its job, it can simply be wrung out and used again.

The discovery of Pure was an accident, albeit a fortunate one. While trying to concoct a new kind of micronised wax, a worker at Hufschmid’s company left a machine running overnight with the wrong temperature and pressure settings. The next morning, the floor was covered in a fluffy, fibrous substance that employees soon nicknamed “magic cotton.”

According to the US National Academy of Sciences, millions of litres of oil are spilled into the earth’s oceans every year. The Deepwater Horizon catastrophe of 2010 let roughly 770 million litres of oil escape into the surrounding waters of the Gulf of Mexico – and that was only the fourth-worst oil spill in history. Besides the devastating effects that contamination has on marine life, oil and chemical spills can also taint water supplies, causing a raft of health problems for hard-hit communities.

Deurex’s employees enjoy demonstrating Pure’s capabilities on a small scale by pouring some oil into a glass of water, sprinkling a fingerful of Pure on top, removing it and then taking a sip of water. But Pure has also been proven to be effective on a much larger scale. The company is working with an NGO to help clean up the heavily contaminated Niger Delta, for instance. In 2013, Deurex also sent trucks full of Pure products to assist firefighters in southern Germany who were retrieving heating oil that had leaked into the basements of dozens of flood victims.

In 2010, the year Pure was invented, the global market for oil spill management was worth approximately EUR 13 billion (USD 14 billion). Figures from the oil industry reveal a downward trend in the number of spills from tankers and oil platforms, but the market for cleanup is still expected to grow to EUR 118 billion (USD 125.6 billion) by 2020. That’s because more oil is being transported via sea tanker and on-land pipelines, and governments – particularly in the US and Europe – have mandated a wider use of spill management technologies.

Negotiations are still ongoing between Deurex and players in the petroleum industry, and the company is confident that its novel product will allow it to gain a foothold there. Pure also holds potential for use in the renewable-energy sector: modern windmills require a large amount of oil for lubrication, and sometimes that oil can leak out. The use of Deurex’s oil-adsorbing wax can help companies save on cleaning costs and reduce the time they are out of action. Currently Deurex has the capacity to produce 700 tonnes of Pure a year, thanks to a new manufacturing plant the company has recently built. Further investments are planned in Germany and in other countries.

The secret behind Pure’s novel chemical properties and how it is able to separate oil from water remains something of a mystery. Wax is naturally water-repellent, but Pure, which is made from polyethylene, has an additional innovative edge that allows it to soak up other water-repellent liquids like oil or chemicals. Deurex’s chemists are still working to determine the “why” behind their serendipitous invention, though demonstrating the “what” was sufficient to secure a patent for Pure.

The manufacturing process for Pure is similar to that for conventional wax. A powdery granulate is heated and compressed, although Pure is produced at a higher temperature and pressure. While the melting point for traditional wax is between 40 and 60 degrees Celsius, Pure’s melting point is 120 degrees. Pure also has a larger surface area than traditional granular binders: one gramme of raw wax can be processed into three square metres of Pure.

Günter Hufschmid began studying chemistry at Munich’s Technical University in 1977 before moving to Aachen in 1982 to complete advanced training in industrial management. His professional career began at German chemical company BASF, where he first worked as a sales manager for special chemicals. Hufschmid would go on to work in BASF’s marketing, market research, account management and sales departments around the world, until he resigned in 1992 to found his own company.

The Deurex Group began operations that same year in Germany’s Saxony-Anhalt region, only two years after German reunification. Capitalising on federal subsidies for new businesses, Hufschmid began to market a new technique he had developed for micronising waxes to make them suitable for use as protective coatings. Today the company has over 100 staff, 20 of whom work on Pure.