A decline in government funding of science and technology research in a number of countries could pose a threat to innovation at a time when global challenges like climate change and ageing populations demand solutions, according to a new OECD report.

The OECD Science, Technology and Innovation Outlook 2016 warns that a backlash against globalisation and migration in some countries could also become a cause for concern given that innovation is increasingly driven by cross-border cooperation and the ability of scientists, students and entrepreneurs to move about and work in different countries over their careers. 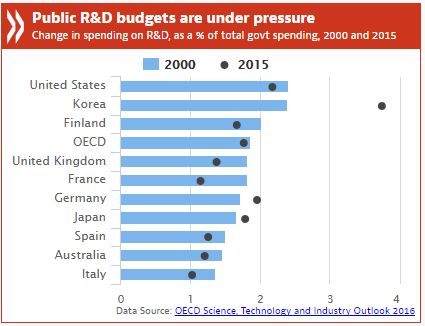 A separate indicator, total R&D spending by governments – most of which is carried out by public entities but may also be done by the private sector funded by public grants – is receding in many countries as other policy priorities such as state pensions, health and social care are absorbing a growing share of public resources.

Data on the percentage of government budgets dedicated to R&D for 2000 and 2015 show that while countries like Germany, Japan and Korea are spending more now on R&D than in 2000 as a share of total expenses, others including Australia, Finland, France, Italy, Spain, the UK and the US have reduced their R&D efforts. Total government spending on R&D in the OECD area has been declining since 2009, following the global financial crisis.

Although they carry out less than 30% of total R&D in the OECD area, universities and public research institutes perform more than three-quarters of basic research. They often undertake longer-term and higher-risk research, as well as the kind of projects that have more potential to translate into tangible societal benefits. Artificial intelligence and personalised medicine are two examples of innovations that came about thanks to scientific and technological developments enabled by public research.

Key findings of the report include:

Read the report along with 50 individual country profiles and 40 policy profiles: