The most common cause of degradation and failures of reinforced concrete structures is chloride-induced corrosion of its embedded steel. This is a pervasive, urgent problem that requires immediate attention and public awareness.

An underlying concept of a chloride threshold is widely used, and all existing models to forecast corrosion performance of reinforced concrete structures exposed to chloride environments are based on this one common theoretical concept.

In Applied Physics Reviews, from AIP Publishing, researchers from Switzerland, the United States, Canada, and Norway advocate for a paradigm change in the science of forecasting corrosion damage within reinforced concrete structures.

Just before the COVID-19 pandemic hit, the international group of scientists met and discussed the severe flaws in using the chloride threshold concept for forecasting corrosion. They say change is needed to address the growing challenges of aging structures losing functionality and potentially collapsing, greenhouse gas emissions, and the economy at large.

“Corrosion of steel within concrete is a complex phenomenon,” said Ueli Angst, from ETH Zürich in Switzerland. “In the generally very high alkaline environment of concrete, where the pH may be higher than 13, steel is considered passive, which means it is covered by a thin layer of protective oxides and its corrosion rate is negligibly low.” 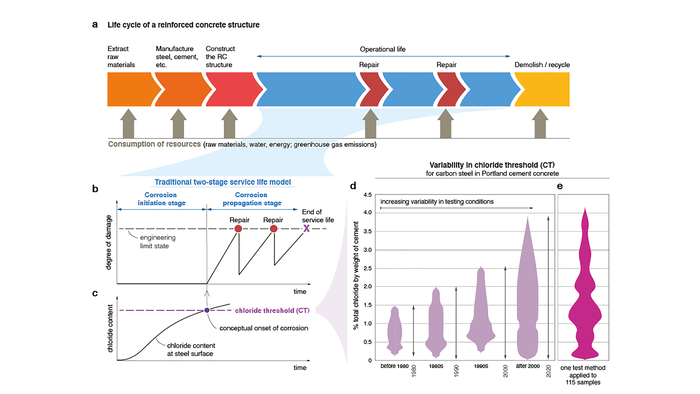 But concrete is porous, and when exposed to salts, such as seawater or road salts, chloride ions can eventually penetrate the concrete and reach the steel. At some point, the protective passive layer will be destroyed, and corrosion may start. Depending on actual exposure conditions, corrosion may occur at a faster or slower pace.

In reality, steel corrosion within concrete is a continuous process rarely separable into uncoupled, sequential phases. The researchers say the focus should be placed on the quantification of the time- and space-variant corrosion rate from the moment steel is placed within concrete until it reaches the end of its service life.

To achieve this, a multiscale, multidisciplinary approach combining scientific and practical contributions from materials science, corrosion science, cement/concrete research, and structural engineering is needed. Angst and his colleagues propose scientific research evolve away from the chloride threshold concept.

“Despite huge amounts of research, no clear chloride threshold could be found, and the influencing factors are complex,” said Burkan Isgor, from Oregon State University. “Unfortunately, mainstream research is still in search of this threshold, which presents a major barrier to developing reliable corrosion forecast models.”

Applied Physics Reviews features articles on significant and current topics in experimental or theoretical research in applied physics, or in applications of physics to other branches of science and engineering. The journal publishes both original research on pioneering studies of broad interest to the applied physics community, and reviews on established or emerging areas of applied physics. See https://aip.scitation.org/journal/are.