VTT Technical Research Centre of Finland developed an extremely efficient small-size energy storage, a micro-supercapacitor, which can be integrated directly inside a silicon microcircuit chip. The high energy and power density of the miniaturized energy storage relies on the new hybrid nanomaterial developed recently at VTT. This technology opens new possibilities for integrated mobile devices and paves the way for zero-power autonomous devices required for the future Internet of Things (IoT). 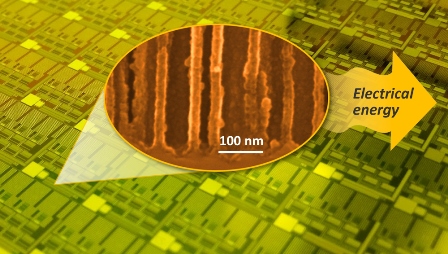 Supercapacitors resemble electrochemical batteries. However, in contrast to for example mobile phone lithium ion batteries, which utilize chemical reactions to store energy, supercapacitors store mainly electrostatic energy that is bound at the interface between liquid and solid electrodes. Similarly to batteries supercapacitors are typically discrete devices with large variety of use cases from small electronic gadgets to the large energy storages of electrical vehicles.

The energy and power density of a supercapacitor depends on the surface area and conductivity of the solid electrodes. VTT’s research group has developed a hybrid nanomaterial electrode, which consists of porous silicon coated with a few nanometre thick titanium nitride layer by atomic layer deposition (ALD). This approach leads to a record large conductive surface in a small volume. Inclusion of ionic liquid in a micro channel formed in between two hybrid electrodes results in extremely small and efficient energy storage.

The new supercapacitor has excellent performance. For the first time, silicon based micro-supercapacitor competes with the leading carbon and graphene based devices in power, energy and durability.

VTT’s research group takes the integration to the extreme by integrating the new nanomaterial micro-supercapacitor energy storage directly inside a silicon chip. The demonstrated in-chip supercapacitor technology enables storing energy of as much as 0.2 joule and impressive power generation of 2 watts on a one square centimetre silicon chip. At the same time it leaves the surface of the chip available for active integrated microcircuits and sensors.

VTT is currently seeking a party interested in commercializing the technique.