The European Commission together with the European High-Performance Computing Joint Undertaking (EuroHPC JU), the Italian Ministry of Universities and Research and the CINECA consortium inaugurated Europe’s latest supercomputer: LEONARDO, located at the Bologna Technopole, in Italy. 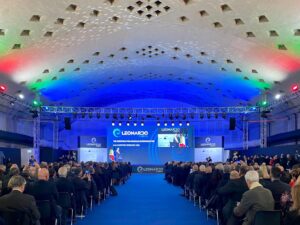 LEONARDO is a world-class supercomputing system, developed and assembled in Europe. When fully operational, it will have a computing power of nearly 250 petaflops (250 million billion calculations per second). LEONARDO is currently placed as the fourth most powerful supercomputer in the world. It is a joint investment of €120 million, half of which comes from the Commission and the other half from the Italian Ministry of Universities and Research and the CINECA consortium consisting of five more participating EuroHPC countries (Austria, Greece, Hungary, Slovakia, and Slovenia).

LEONARDO is the second of the European pre-exascale supercomputers to be put into operation, after LUMI in Kajaani, Finland. It combines state-of-the-art high-performance computing components and the use of artificial intelligence to perform highly complex tasks. As such, it will enable unprecedented research into cancer and drug discovery, understanding the functioning of the human brain, discovering clean energy technologies, doing more precise climate modelling, as well as helping with predicting and monitoring natural disasters and pandemics.

The LEONARDO supercomputer system focuses on environmental sustainability and is equipped with tools enabling a dynamical adjustment of power consumption, thus granting a smart and optimal balance between energy saving and performance. Moreover, it uses a water-cooling system for increased energy efficiency.

The computing services provided by CINECA with LEONARDO will be further enhanced by the integration of a quantum computer, as CINECA has also been selected as a hosting entity for one of the first European-built quantum computers.

The deployment of the European world-class high-performance computing and data infrastructure continues with the ongoing installation of the Deucalion petascale supercomputer in Portugal, and the third European pre-exascale MareNostrum 5 supercomputer in Spain.

Further to this, new sites for supercomputers have already been announced by the EuroHPC JU in June 2022, with one of them to be Europe’s first exascale supercomputer: JUPITER, which will be hosted in the Jülich Supercomputing Centre in Germany.

In October 2022 the EuroHPC JU also announced six sites to host quantum computers, which will be integrated with existing supercomputers.

Additionally, a call for a second European exascale supercomputer in 2023 is expected to be launched, as well as the deployment of additional supercomputers and quantum computers in 2023 and beyond.

CINECA is a non-profit consortium, made up of 70 Italian universities, 40 national institutions and the Italian Ministries of Universities and Research, and of Education. The five countries participating from the EuroHPC JU are: Greece, Hungary, Austria, Slovenia, and Slovakia.

LEONARDO now joins the existing supercomputers of the EuroHPC JU: Discoverer in Bulgaria, MeluXina in Luxembourg, Vega in Slovenia, Karolina in Czechia, and LUMI in Finland.

The European High-Performance Computing Joint Undertaking (EuroHPC JU) is a legal and funding entity created in 2018 to enable the EU and EuroHPC participating countries to coordinate their efforts and pool their resources with the objective of making Europe a world leader in supercomputing. In July 2021, the Council adopted the EuroHPC JU Regulation, bringing a further investment of €7 billion.