Research into highly sensitive magnetic field sensors has been the focus of nano research at Kiel University for a number of years. On Wednesday, 25 May, the German Research Foundation (DFG) approved the following collaborative research centre (CRC) 1261 “Magnetoelectric Sensors: From Composite Materials to Biomagnetic Diagnostics” representing another milestone in this development. The researchers will receive around 11 million Euros during the first funding period for an initial four years to research magnetic field sensors for use in biomagnetic diagnostics. 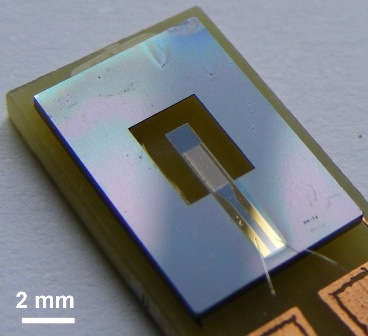 Kiel University will receive 11 million Euros over the next four years for research into new biomagnetic sensors.
Photo/copyright: Christine Kirchhof

“In the new CRC we are expecting to research completely new types of magnetic field sensor concepts, which are specifically interpreted on the basis of scientific and diagnostic issues in neurology and cardiology as a result of the strong interdisciplinary collaboration between physics, materials science, electrical engineering and medicine.” This is how the spokesman of the CRC, Professor Eckhard Quandt, describes the objective of the initiative. This will also benefit Kiel overall as a science location. It will create 26 new jobs for scientists. In addition, research collaboration in the region will be extended through cooperation between the university, the University Medical Center (UKSH) and the Fraunhofer Institute for Silicon Technology in Itzehoe (ISIT), says Quandt.

“This new interdisciplinary initiative therefore noticeably strengthens our research focus, Kiel Nano, Surface and Interface Science”, says Kiel University’s President Professor Lutz Kipp. “Its potential areas of application in medical diagnostics make it clear how worthwhile the investment in this research is. The renewal of the funding worth millions is impressive evidence of the excellent conditions that we have created in Kiel and at Kiel University for research into issues concerning nanotechnology and surface sciences in the past. This success is also an important foundation for new ideas at Kiel University for the forthcoming excellence initiative.”

More specifically, scientists will be working on recording brain and heart currents via their magnetic fields in the new CRC 1261. Previous research has already made it possible to improve the detection threshold to such an extent that biomagnetic signals from the brain or heart can now be measured. Magnetic measurements promise improved diagnosis, for example in relation to spatial resolution and/or for examinations over a long period of time as a supplement or alternative to the established electrical measurements – such as the electroencephalography (EEG) or the electrocardiography (ECG).

Although this is already possible today, the measurements have so far been associated with considerable costs and efforts so that these technologies have found it difficult to establish themselves in medical practice. In order for the results not to be distorted, external magnetic fields have to be strictly screened and conventional biomagnetic interfaces must be cooled to approximately -270 degrees Celsius, which is extremely complex. However, the new sensors, which the researchers in CRC 1261 want to develop, should be able to make do without the complex cooling and even screening in the long term. These sensors could be used, for example, to detect pathological brain activity and to stimulate demand-responsive areas of the brain to treat epileptic fits or Parkinson’s symptoms.

New signal processing strategies and highly sensitive sensors for extremely small magnetic fields are a prerequisite for this. The Faculties of Engineering, Mathematics and Natural Sciences, and Medicine at Kiel University are involved in their development, starting with the physical basics, via production and characterisation to application in cardiology, neurology, neuro-paediatrics and medical psychology. Other partners are the UKSH and the Fraunhofer Institute for Silicon Technology in Itzehoe.