The International Space Station (ISS) is an incredible research platform that has hosted more than 3,000 experiments—but not all that research takes place inside the orbiting laboratory. On the outside of the ISS, the extreme space conditions provide an unparalleled environment to test new materials and advance technologies in ways not possible on Earth. 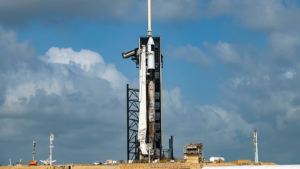 On this mission, an investigation from the University of Illinois-Urbana Champaign (UIUC) is using MISSE to evaluate the durability of a new class of 3D-printed polydicyclopentadiene (pDCPD)-based thermosetting polymers for aerospace applications. Such materials could provide a more durable alternative to the currently used thermoplastics such as Kaplon or Teflon, which degrade with extended exposure to the extreme environmental conditions in space.

Using novel polymer formulations, 3D printing, and a rapid polymer curing technique, the UIUC team produced new pDCPD-based polymers and composite materials. Despite being lightweight, pDCPD has a cross-linked structure that improves resistance to debris impact and corrosion, and the team’s composite materials incorporate silica particles to further enhance corrosion resistance. If successfully demonstrated, these new materials could provide benefits not only in their durability but also in their ability to be rapidly produced using energy-saving manufacturing processes.

Another MISSE user on this mission is a research team from Houston-based technology company Nanohmics. This project aims to validate a new ultra-compact spectral imager developed by Nanohmics, in collaboration with researchers at the University of Maryland and the NASA Langley Research Center. The sensor images in the visible range of the electromagnetic spectrum, but Nanohmics is also developing variations of the technology for multiple spectral bands.

While most current spectral imaging satellites are large, heavy, and expensive, Nanohmics’ sensor is small enough to fit in the palm of your hand—making it the smallest spectrograph ever flown on the ISS. Because of its compact size and weight, the sensor could be used in CubeSats, providing more cost-efficient remote sensing capabilities.

Accurate calibration of the sensor is essential to ensuring the quality of its measurements. Using the MISSE Flight Facility, Nanohmics will test the in-orbit performance of its prototype sensor and validate the sensor’s calibration stability. Results from this investigation will allow the company to raise the technology readiness level (TRL) of the sensor to a TRL of 7, advancing it closer to commercialization.

“MISSE provides one of the fastest, easiest, and least expensive ways to test new technology in space, and this is only possible because of the agreements we have with the ISS National Lab and NASA,” said Gittleman. “This is what MISSE does for technology developers and researchers—it dramatically increases the speed at which you can develop new generations of technology.”