The use of tethered unmanned aerial vehicles (TUAVs) has been modeled as a powerful new tool for improving cellular phone and internet networks. When employed as flying base stations with a cable connection, multirotor drones promise to quickly ramp up coverage, increase the efficiency of urban networks and provide much needed access in remote rural areas.

“Our aim has been to show that TUAVs offer a very appealing solution as a bridge between fixed base stations and free-flying drones,” says Mohamed-Slim Alouini, who has authored two papers on the subject with other KAUST mathematicians Mustafa A. Kishk and Ahmed Bader. “We hope our theoretical investigation will spur others to develop the idea to its full potential,” says Alouini. 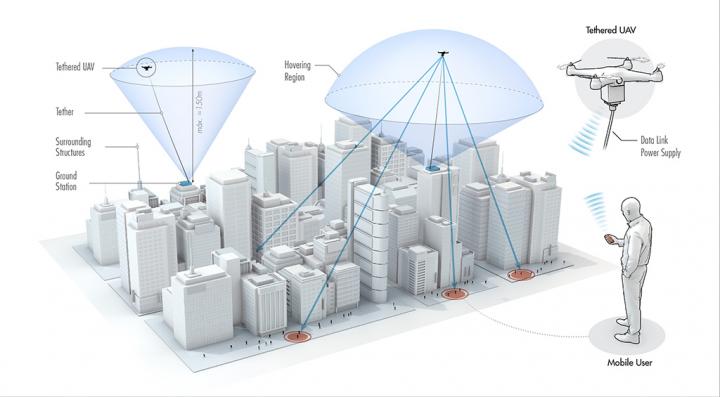 Researchers anticipate that the TUAVs could potentially offload data during peak hours and shift their position around the clock to cover varying traffic distribution throughout the day.
CREDIT
© 2020 KAUST; Xavier Pita

In 2017, after Hurricane Maria devastated Puerto Rico, the U.S. telecommunications company AT&T showed how drones (UAVs) fitted with cellular transceivers could quickly be deployed to replace inoperable base stations and restore mobile coverage. Mathematicians have been calculating the optimal positioning of such “COWs” (cells on wings) ever since.

Adding a cable for power and data has been an obvious development. A U.S. startup called Spooky Action, for example, has been experimenting with TUAVs to connect remote areas of Africa.

TUAVs on the market today can stay aloft for a month or more, much longer than their untethered counterparts, which must land to recharge every hour or so. With a fiber optic line running alongside their power connection, TUAVs can also “backhaul” their data to the core network with much greater efficiency. Their drawback is their restricted mobility, although the cable connecting currently available products can be as long as 150 meters.

Unlike free-flying UAVs, little theoretical work has been done on how best to position their tethered counterparts. The KAUST researchers took two approaches. First, they used exhaustive search optimization; crunching numbers for every item in a set of possible locations, with each location corresponding to a value of coverage probability. Secondly, they derived closed-form expressions for a suboptimal solution; faster arrived at but less accurate. Future modeling will likely use both methods, with the latter greatly reducing the size of the set searched through by the former.

“An interesting result was that with longer tethers, TUAVs will outperform free-flying UAVs in just about every scenario,” says Kishk. “Tomorrow’s 5G equipment is heavier and consumes more power than 4G today, so their advantage will become more apparent.”

Tethered to tall buildings, they would offload data during peak hours and shift their position around the clock to cover varying traffic distribution throughout the day.

While the KAUST researchers only looked into the optimal placing of one TUAV for their papers, they are now developing more complex models, featuring two or more flying base stations. They hope that other mathematicians will join them in their pursuit to optimize the use of TUAVs.