A research group has revealed a cobalt-chromium-based biomaterial that mimics the flexibility of human bones and possesses excellent wear resistance. The new biomaterial could be used for implants such as hip or knee joint replacements and bone plates, alleviating problems associated with conventional implant materials. 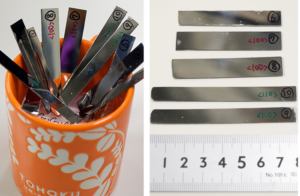 Details of their research were published in the journal Advanced Materials on May 9, 2022.

With the elderly population increasing across the globe, the need for improved biomaterials that can replace or support damaged bones has risen. For this purpose, metals are widely used because of their strength and ductility. However, as a consequence of their strength, their flexibility diminishes.

To date, most metallic biomaterials are stiffer than human bones, and using them as implants leads to bone atrophy – a condition where bone density is reduced because of a breakdown in bone substance and structure. Meanwhile, biomaterials with elevated flexibility lose their wear resistance.

Although superelastic materials made from nickel-titanium (Ni-Ti) alloys, which are commonly used in stents and orthodontic wires, maintain high flexibility and the ability to recover from strain, Ni is an allergic element. Ni-free alloys have not replicated the superelasticity of Ni-Ti alloys, rendering them impractical.

The research group, which comprised researchers from Tohoku University’s Graduate School of Engineering and Institute for Materials Research (IMR), the J-PARC Center, the Japan Atomic Energy Agency, and the Czech Academy of Sciences, focused on lessening the Young’s modulus gap between metal implants and human bones. When a material is flexible, it has a low Young’s modulus. When it is stiff, it has a high Young’s modulus.

“We knew that chromium possesses strong corrosive resistance, but the superelasticity, flexibility, and significant wear resistance of the cobalt-chromium-based material surprised us,” added Xu.

Moving forward, the research group hopes to explore why their CCAS achieved the superior properties it did. Doing so could lead to developing next-generation materials with even better properties.