The vision of the future of miniaturisation has produced a series of synthetic molecular motors that are driven by a range of energy sources and can carry out various movements. A research group at Friedrich-Alexander-Universität Erlangen-Nürnberg (FAU) has now managed to control a catalysis reaction using a light-controlled motor. This takes us one step closer to realising the vision of a nano factory in which combinations of various machines work together, as is the case in biological cells. The results have been published in the Journal of the American Chemical Society. 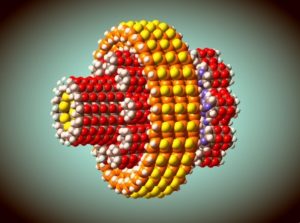 Per definition, a motor converts energy into a specific type of kinetic energy. On a molecular level, for example, the protein myosin can produce muscle contractions using chemical energy. Such nanomachines can now be synthetically produced. However, the molecules used are much smaller than proteins and significantly less complex.

‘The laws of mechanical physics cannot simply be applied to the molecular level,’ says Prof. Dr. Henry Dube, Chair of Organic Chemistry I at FAU. Inertia, for example, does not exist at this level, he explains. Triggered by Brownian motion, particles are constantly in motion. ‘Activating a rotating motor is not enough, you need to incorporate a type of ratchet mechanism that prevents it from turning backwards,’ he explains.

In 2015 while at LMU in Munich, Prof. Dube and his team developed a particularly fast molecular motor driven by visible light. In 2018, they developed the first molecular motor that is driven solely by light and functions regardless of the ambient temperature. A year later, they developed a variant capable not only of rotation but also of performing a figure of eight motion. All motors are based on the hemithioindigo molecule, an asymmetric variant of the naturally occurring dye indigo where a sulphur atom takes the place of the nitrogen atom. One part of the molecule rotates in several steps in the opposite direction to the other part of the molecule. The energy-driven steps are triggered by visible light and modify the molecules so that reverse reactions are blocked.

Standard catalysts in use

After coming to FAU, Henry Dube used the rotating motor developed in 2015 to control a separate chemical process for the first time. It moves in four steps around the carbon double bond of the hemithioindigo.  Two of the four steps triggered by a photo reaction can be used to control a catalysis reaction. ‘Green light generates a molecular structure that binds a catalyst to the hemithioindigo and blue light releases the catalyst,’ explains the chemist.

A standard catalyst is used that does not have any metal atoms. Using electrostatic forces, the catalyst docks via a hydrogen bond onto an oxygen atom in the ‘motor molecule’. All catalysts that use a hydrogen bond could be used, in principle. ‘The great advantage of hemithioindigo is that its innate structure has a bonding mechanism for catalysts,’ explains Prof. Dube. It would otherwise have to be added using chemical synthesis.

The rotation of the hemithioindigo motor is controlled by visible light. At the same time, the system allows the targeted release and bonding of a catalyst that accelerates or decelerates desired chemical reactions. ‘This project is an important step towards integrating molecular motors in chemical processes simply and in a variety of ways,’ says Prof. Dube. ‘This will let us synthesise complex medication at a high level of precision using molecular machines like a production line in future.’