Hundreds of commercial airline pilots currently flying may be clinically depressed, according to an anonymous survey of nearly 1,850 pilots conducted by researchers at Harvard T.H. Chan School of Public Health. 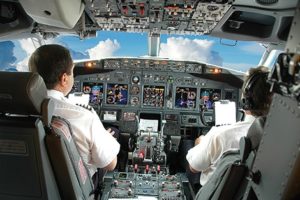 The new findings come a year and a half after a Germanwings co-pilot who suffered from depression deliberately crashed a plane into the French Alps, killing 150.

The study is the first to describe airline pilot mental health—with a focus on depression and suicidal thoughts—outside of the information derived from aircraft accident investigations, regulated health examinations, or identifiable self-reports, all of which are records protected by civilian aviation authorities and airline companies. For those sources of information, there is a strong disincentive for pilots to accurately report if they are suffering from depressive symptoms, according to the study authors.

“We found that many pilots currently flying are managing depressive symptoms, and it may be that they are not seeking treatment due to the fear of negative career impacts,” said Joseph Allen, assistant professor of exposure assessment science and senior author of the study. “There is a veil of secrecy around mental health issues in the cockpit. By using an anonymous survey, we were able to guard against people’s fears of reporting due to stigma and job discrimination.”

Globally, roughly 350 million people suffer from depression. While effective treatments exist, fewer than half of those with depression around the world receive treatment, according to the World Health Organization. One of the major barriers to people seeking care is social stigma.

Respondents to the web-based survey, conducted between April and December 2015, came from over 50 countries. The survey’s standardized questions about job content and health were drawn from the Job Content Questionnaire (JCQ) and the U.S. Centers for Disease Control and Prevention’s National Health and Nutrition Examination Survey (NHANES) and included questions about mental health that doctors use to diagnose depression. The survey was designed with a mix of questions so as not to suggest a focus on mental health, in order to minimize potential bias in responses.

A greater proportion of male pilots than female pilots reported that they had experiences “nearly every day” of loss of interest, feeling like a failure, trouble concentrating, and thinking they would be better off dead. Female pilots were more likely than male pilots to have at least one day of poor mental health during the previous month, and were more likely to have been diagnosed with depression.

The study also found that depression was more likely among pilots who used higher levels of sleep aid medication and those who were experiencing sexual or verbal harassment.

“Our study hints at the prevalence of depression among pilots—a group of professionals that is responsible for thousands of lives every day—and underscores the importance of accurately assessing pilots’ mental health and increasing support for preventative treatment,” said Alex Wu, a doctoral student at Harvard Chan School and first author on the paper.