Arachnophobia is the technical term for the fear of spiders. Approximately 3.5 to 6.1 percent of the population suffer from this phobia. Exposure therapy is the most common form of treatment. However, 60 to 80 percent of arachnophobes do not receive any therapy because of a lack of services. Others simply cannot bear the terror of facing up to real spiders. Together with partners, Fraunhofer researchers are developing a digital therapy system that is designed to facilitate treatment in the home environment and give sufferers a better sense of security. A demonstrator of the system will be exhibited at the MEDICA trade fair in Düsseldorf from November 12 to 15 (Hall 10, Booth G05/H04). 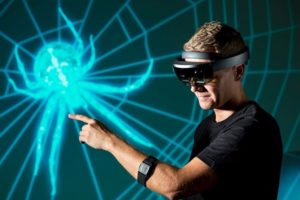 © Fraunhofer IBMT, Bernd Müller
With the aid of a digital therapy environment displayed in data glasses, exposure therapy is transferred to virtual reality.

In Germany, there are no wild spiders that pose a threat to humans. But that does not stop many people panicking at the sight of one. Their bodies react with heart palpitations, shivering, dizziness, sweating and shortness of breath. Sometimes the psychological stress is so great, the fear so overwhelming, that sufferers of the phobia have to undergo therapy. Behavioral therapy approaches have proved most successful in treating arachnophobia. Exposure therapy, which involves confronting patients with one or more real spiders, is considered particularly effective. However, sufferers of the phobia often do not avail themselves of such treatments, either because exposure to the eight-legged creatures is a too terrifying prospect, or because of a lack of therapy options available where they live.

In the “DigiPhobie” project, researchers at the Fraunhofer Institute for Biomedical Engineering IBMT are working to remedy these problems in collaboration with Promotion Software GmbH, Saarland University and Saarland University Medical Center. They are developing a new kind of digital therapy system that is designed to enable exposure therapy in a domestic environment. It is based on the idea that by confronting the feared object in virtual or augmented reality, patients will find it easier to face their fears and be less intimidated by the prospect of starting treatment. The system comprises a digital therapy environment, wearable sensors and augmented reality (AR) glasses to be precise.

“We transfer real exposure therapy to the digital game system that runs on the data glasses. All therapy tasks are digitally simulated. The phobia sufferer can perform various challenges – such as catching a spider with a glass and a postcard or prodding one with their finger – in virtual reality,” says Dr. Frank Ihmig, scientist at Fraunhofer IBMT, describing the therapeutic approach. Ihmig and his team create the software for therapy management and the biofeedback control system, which consists of wearable sensors that measure the patient’s vital parameters during a session, such as their heart rate variability, skin conductance and breathing rate.

Out of the parameters measured, it is possible to extract features that indicate emotional stress. Using these stress features the researchers train a machine learning algorithm. “With the learning algorithm, we derive the patient’s physiological fear response and try in this way to determine the intensity of their fear. Alongside the subjective perception of the arachnophobe, this provides an objective measure of their fear response. This calculated measure is fed back into the digital therapy game, effectively creating a closed-loop system. In this way, we can adapt the therapy to the personal needs of the patient,” explains Ihmig. Game elements such as the size, number and distance of spiders, as well as the movement behavior of the arachnids, can be adjusted dynamically.

The Fraunhofer researchers use adhe­sive electrodes to measure ECG and skin con-ductance. Breathing is monitored with the aid of a chest strap with piezoelectric sensors. The measured signals are transmitted wirelessly via Bluetooth to the therapy management software. All data on the sessions and the course of the therapy is archived in the database and made available to therapists and clinical researchers for analysis.

Effectiveness to be determined in clinical study

In spring 2019, a validation study will begin to evaluate the effectiveness of the digital therapy. Similar approaches using virtual reality (VR) glasses have shown that good outcomes can be achieved with this form of therapy. The results of the analyses are to lay the foundation for further treatment concepts. It is conceivable, for example, that the therapy could be applied to other phobias such as the fear of snakes or cockroaches. “We hope that the results of the clinical study open up new perspectives for treating patients suffering from specific phobias,” says Ihmig.

On top of this, the results provide the basis for developing a kit containing the complete therapy set. “The long-term goal for patients is to be able to borrow the kit from their doctor’s office or pharmacy or medical equipment store and carry out individual sessions and exercises at home,” says Ihmig. The researcher and his team will be presenting the biofeedback system at the joint Fraunhofer booth (Hall 10, Booth G05/H04) at the MEDICA trade fair in Düsseldorf from November 12 to 15.

The German Federal Ministry of Education and Research (BMBF) is funding the “DigiPhobie” project, which runs from 2017 to the end of 2019, as part of its “Medical Engineering Solutions for Digital Health Care” initiative.