Researchers at CRANN and the School of Physics at Trinity College Dublin have discovered that a new material can act as a super-fast magnetic switch. When struck by successive ultra-short laser pulses it exhibits “toggle switching” that could increase the capacity of the global fibre optic cable network by an order of magnitude. 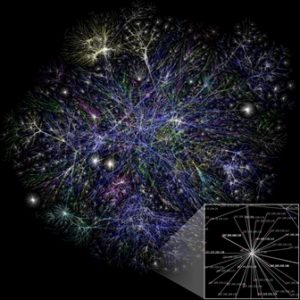 Switching between two states – 0 and 1 – is the basis of digital technology and the backbone of the internet. The vast majority of all the data we download is stored magnetically in huge data centres across the world, linked by a network of optical fibres.

Obstacles to further progress with the internet are three-fold, specifically the speed and energy consumption of the semiconducting or magnetic switches that process and store our data and the capacity of the fibre optic network to handle it.

The new discovery of ultra-fast toggle switching using laser light on mirror-like films of an alloy of manganese, ruthenium and gallium known as MRG could help with all three problems.

Not only does light offer a great advantage when it comes to speed but magnetic switches need no power to maintain their state. More importantly, they now offer the prospect of rapid time-domain multiplexing of the existing fibre network, which could enable it to handle ten times as much data.

The science behind magnetic switching

Working in the photonics laboratory at CRANN, Trinity’s nanoscience research centre, Dr Chandrima Banerjee and Dr Jean Besbas used ultra-fast laser pulses lasting just a hundred femtoseconds (one ten thousand billionth of a second) to switch the magnetisation of thin films of MRG back and forth. The direction of magnetisation can point either in or out of the film.

With every successive laser pulse, it abruptly flips its direction. Each pulse is thought to momentarily heat the electrons in MRG by about 1,000 degrees, which leads to a flip of its magnetisation. The discovery of ultra-fast toggle switching of MRG has just been published in leading international journal, Nature Communications.

“We have a lot of work to do to fully understand the behaviour of the atoms and electrons in a solid that is far from equilibrium on a femtosecond timescale. In particular, how can magnetism change so quickly while obeying the fundamental law of physics that says that angular momentum must be conserved?

“In the spirit of our spintronics team, we will now gather data from new pulsed-laser experiments on MRG, and other materials, to better understand these dynamics and link the ultra-fast optical response with electronic transport. We plan experiments with ultra-fast electronic pulses to test the hypothesis that the origin of the toggle switching is purely thermal.”

Next year Chandrima will continue her work at the University of Haifa, Israel, with a group who can generate even shorter laser pulses. The Trinity researchers, led by Karsten, plan a new joint project with collaborators in the Netherlands, France, Norway and Switzerland, aimed at proving the concept of ultra-fast, time-domain multiplexing of fibre-optic channels.

The work that made the discovery possible was supported by Science Foundation Ireland, the Irish Research Council and the European Commission.