Pioneering research published in Nature by Professor Feng Ding’s team from the Center for Multidimensional Carbon Materials, within the Institute for Basic Science (IBS), in collaboration with Professor Jin Zhang’s team, at Peking University and colleagues, has demonstrated how to control the synthesis of special tiny carbon cylinders known as carbon nanotubes (CNTs), in order to synthesize horizontal arrays of CNTs with the same structure.

Structure of carbon nanotube (CNT). (Left) Illustration of rolling graphene into CNTs of different structures, denoted by two indices, like (8,4). (Right) Microscope images of an array of CNTs with the mean diameter of 1.21 nm.

Due to their exceptional mechanical, electrical and thermal properties, CNTs are considered an excellent alternative to silicon for next generation microelectronics. However, since CNTs’ electronic properties are structure dependent, finding a reliable way to synthesize CNTs with the same structure, rather than a mix of different types, have kept scientists puzzled for the last 20 years.

CNTs resemble sheets of graphene rolled up to form tiny tubes, 100,000 times thinner than a human hair. In reality, however, no rolling is involved in the synthesis process, and CNTs usually grow from the surfaces of tiny metal particles, called catalysts, via catalytic chemical vapor deposition. Beyond being a supportive structure, the catalyst decomposes hydrocarbon molecules into carbon atoms that form the carbon nanotubes and facilitates the insertion of carbon atoms into the growing cylinder. In 2014, Ding and his collaborators discovered that using solid metal alloy catalysts, such as W6Co7, can lead to the synthesis of CNTs with specific structures. In their most recent paper, they expanded this knowledge much further.

Dominance of the semiconducting (8, 4) CNTs when tungsten carbide (WC) is used as catalyst. (a) Raman measurement clearly indicates the predominance of CNTs with the (8, 4) structure in the sample prepared using WC as catalysts. (b) Both transmission electron microscopy (TEM) imaging and electron diffraction pattern of the synthesized CNTs proved that the structure of the dominating CNTs is (8, 4).

Like in a battleship game where the position of the boats is defined by two numbers, the structure of CNTs is defined by a pair of indices. IBS scientists found they could grow both conducting (12, 6) and semiconducting (8, 4) CNTs with very high selectivity. These structures are highly desired for possible applications in transistor devices. 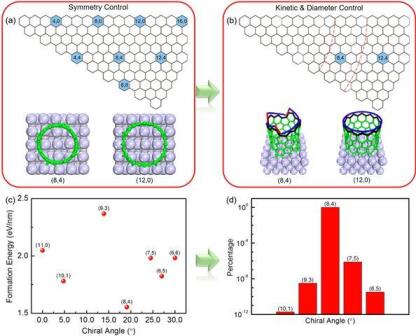 Why does the tungsten carbide (WC) catalyst produce mainly (8, 4) CNTs? (a) Like in a battleship game with the position shaped like hexagons rather than boxes, CNTs are defined by two indices. These two numbers indicate different structures. Among all the possible CNTs that can be formed, that is, one for each combination of the two numbers, only the ones in blue fit the symmetry of the underlying solid catalyst (WC, shown as gray balls). They are the ones whose two indices can be divided by 4. (b) Then, according to the growth rate, scientists slimmed down to only two CNTs structures which could grow quickly: the (8, 4) and the (12, 4). Some CNTs, such as (12, 0) were eliminated because their flat edge does not allow the fast incorporation of carbon atoms. (c) Finally, the scientists controlled the size of the catalyst and found that (8, 4) CNT is the one that fits the small catalyst. By controlling the size of the catalyst, only one type of CNTs can be synthesized, so that the purity of the resulting array improves. (d) In this study, scientists managed to obtain 80-90% of (8, 4) CNTs with a small fraction of other types. Theoretically, IBS scientists predict that, in the optimal conditions, the purity of the (8, 4) CNTs could reach 99.9% or higher.

Considering the symmetry of the catalysts, the kinetics of CNT growth and the size of the catalyst particles, the researchers could tune the production of CNTs towards one predominant type. When using tungsten carbide (WC) as catalyst, the (8, 4) CNTs are found to grow preferentially, while if molybdenum carbide (Mo2C) was used, the (12, 6) structure was predominant. “A specific catalyst can produce a specific group of CNTs as they share the same symmetry,” explains Prof. Ding. Moreover, the CNTs grow in parallel on a substrate and therefore can be used for device applications directly.

The (8, 4) CNTs’ purity reached 80-90%, which is among the highest that has ever been achieved experimentally. “The theoretical calculations demonstrate that the selectivity could be greater than 99.9%, indicating that there is still a large scope for improvement,” explains Prof. Ding. After producing semiconducting (8, 4) CNTs arrays for the first time, the team aims to understand and control the formation of all types of carbon nanotubes, and improve the selectivity in the future.

IBS was founded in 2011 by the government of the Republic of Korea with the sole purpose of driving forward the development of basic science in South Korea. IBS has launched 28 research centers as of February 2017. There are nine physics, one mathematics, six chemistry, eight life science, one earth science and three interdisciplinary research centers.