Companies across the world are competing fiercely to provide high-resolution displays to electronic devices such as TVs and smartphones. In particular, the virtual reality, a keyword of the 4th industrial revolution, requires a much higher resolution to improve the picture quality. A Korean research team developed a technology to produce a ‘nano display’ with a phenomenal resolution based on the 3D printing technique and posted the result of the study on a SCI journal, garnering much global attention.

A team led by Dr. Jaeyeon Pyo and Dr. Seung Kwon Seol at Nano Hybrid Technology Research Center of Korea Electrotechnology Research Institute (KERI), a government-funded research institute under National Research Council of Science & Technology (NST) of the Ministry of Science and ICT (MSIT), developed a ‘nanophotonic 3D printing technology’ allowing the production of super-high-resolution display devices with high-density integration of nanoscale pixels based on the 3D layout for the first time in the world. 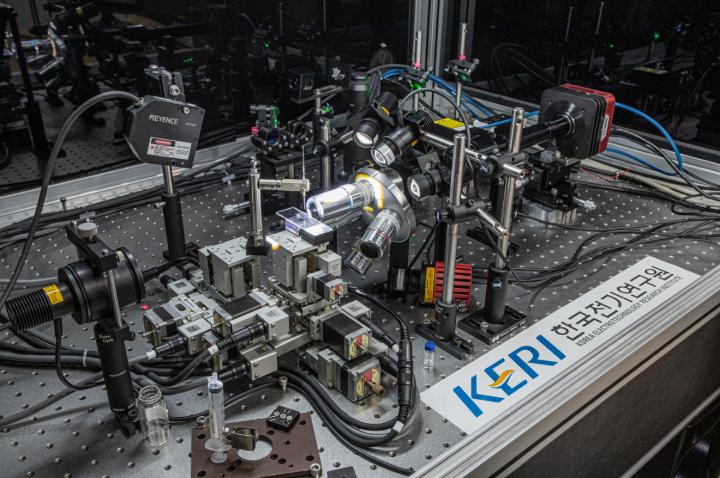 A Korean research team developed a technology to produce a ‘nano display’ with a phenomenal resolution based on the 3D printing technique and posted the result of the study on a SCI journal, garnering much global attention.
CREDIT
Korea Electrotechnology Research Institute (KERI)

The nanophotonic 3D printing technology of KERI enables the production of three-dimensional (3D) pixels with nanoscale dimensions based on the 3D printing of quantum dots. When stimulated by light or electricity, quantum dots emit light in multiple colors. Thanks to the color purity and high stability, they are widely used as light emitting materials for displays in many electronic devices such as TV, smartphones, tablets.

To manufacture displays applying quantum dots, pixels are produced by coating them lightly in film. Here, a high resolution display device means that it contains many pixels on the screen. As more pixels are densely integrated, users can enjoy a more precise and delicate image or picture.

Companies are making an effort to decrease the pixel size to increase their numbers for an enhanced resolution. However, they faced with a problem of limited intensity of light as the pixel size was reduced. As TVs, smartphones, and other electronic devices largely boost super high resolution displays, securing a higher definition with a smaller pixel size has become the key to lead the highly competitive market.

The KERI research team commenced the R&D project based on the idea that the production of pixels with a 3D structure, instead of using a thin film, would help them secure the intensity of light required for a high resolution. The research team successfully demonstrated the production of pixels with a lateral dimension of 620nm and 10,000nm in height with its own 3D printing technology. Instead of using a 2D patterning, the team applied the 3D structure to overcome the light intensity problem. The 3D layout enabled a 2-fold increase in brightness with full colors (red, green, blue) compared to conventional thin film based structure.

With regard to pixels per inch (PPI), an indicator used to measure the pixel density (resolution), the KERI technology demonstrates the three primary colors in 5,600PPI, overwhelmingly exceeding that of 8K QLED TV (100PPI), laptop (200PPI), and smartphone (800PPI), while surpassing the limit of commercial technology (1,000PPI) by 5 times or more. Such an outstanding pixel density allows the technology to be applied extensively to future innovative displays adopting VR and AR, beam projector, etc., requiring a super-high-resolution. In addition, the 3D printing technology can be applied to ultra-high density data storage medium anti-forgery technology using super-high-resolution encryption pattern in 3D structure camera sensor bio technology etc.

One of the biggest benefits of ‘nanophotonic 3D printing technology’ of KERI is that 3D printing of quantum dots onto Polyimide (PI) or Polyethylene terephthalate (PET), materials used to produce flexible substrates, is available. Hence, it can be applied to wearable or rollable devices as well.

Dr. Jaeyeon Pyo said, “It is not easy to find cases of using 3D printing techniques to the display industry across the world. We took a different approach from previous 3D printing research, which was mostly relying on foreign tools and equipment. It can be considered as a complete technology independence to develop an ‘integrated solution’ from 3D printing materials to original technology and equipment.”

In recognition of the outstanding outcome of the KERI research, the result was published in ACS Nano (American Chemical Society), the world’s most prestigious academic journal in material science (7.31/ First author: Jongcheon Bae in master’s course, Corresponding author: Dr. Jaeyeon Pyo, Project leader: Dr. Seung Kwon Seol). With regard to the impact factor used as a proxy for the relative importance of a journal within its field, it recorded 14.588 and belonged to the top 1.625% among all SCI academic journals.