25 spin-offs were founded at ETH Zurich last year – more than ever before in a single year. The new record highlights the benefits of supporting young talent early on and illustrates that ETH’s own support programme is paying off. 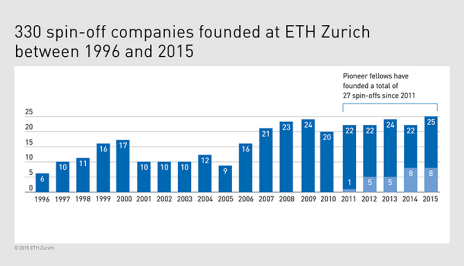 Since 1996, 330 spin-off companies have been founded at ETH Zurich. (Graphics: ETH Zurich)

Over 20 spin-offs have been founded at ETH Zurich every year since 2007. This trend has recently culminated in a new record: in 2015, 25 young entrepreneurs founded their own companies in a wide range of fields. New methods have been developed to measure muscle fatigue or to optimise liposomes for patient detoxification; batteries are improved and smart light bulbs are programmed for greater protection against burglaries.

Consistent with the trend in recent years, most companies (seven in 2015) were established in the field of information and communication technology. Also of note were several new spin-offs in the fields of biotechnology (four) and the development of medical devices (three). Electrical engineering, mechanical engineering and consulting and services were also well-represented, with three spin-offs apiece. All these areas correspond with ETH Zurich’s focus areas of research.

It is worth highlighting that eight of the 25 new ETH spin-offs were founded by Pioneer Fellows. ETH Zurich’s Pioneer Fellowship Programme already supports Master’s students who are looking to transform a business idea into reality. “It shows that it pays off to encourage young researchers to turn their ideas into marketable products at a very early stage. Over the past five years, the programme has been continually improved and now we are reaping the fruits of these labours every year,” says Detlef Günther, Vice President of Research and Corporate Relations.

Since 2010, 52 Pioneer Fellows have been funded through numerous generous donations from third parties, culminating in 27 spin-offs to date – and many Fellowships are still ongoing. Of the 33 completed programmes, 23 Pioneer Fellows (around 70%) have founded a spin-off. It is therefore no surprise that the government is planning to integrate the ETH model into a new support programme which will be expanded across Switzerland.

ETH’s prospects are also bright in 2016: “In December, the Pioneer Fellows had the chance to present their ideas in a ‘Pioneer-Pi-Pitch’ and I was impressed just how many creative minds are at work here and how eager they are to transform their innovative ideas into reality as soon as possible” Günther says.

Founding a new company demands courage and confidence in your own ability. Ensuring you have enough capital and proving yourself in the real world of business is a challenge. ETH Zurich can look back on a successful year in this respect, too: ETH spin-offs, Pioneer Fellows and ETH students received over CHF 1 million from Venture Kick. At the Heuberger Young Entrepreneur Awards, ETH spin-offs attracted CHF 500,000 in funding. ETH spin-offs also received substantial investments: GetYourGuide raised USD 50 million, while Insphero and Flisom raised CHF 20 million and CHF 10 million respectively, to name just a few examples.

“Our young talents believe in themselves and have been rewarded for taking a risk. Seeing how much has been invested in our spin-offs in 2015 makes me delighted for our young entrepreneurs. And I have no doubt that the money has been invested wisely,” says Günther. Just how profitable an ETH spin-off can be is demonstrated by the growth of GlycoVaxyn, founded in 2004. In 2015, GlaxoSmithKline bought the company for USD 212 million.