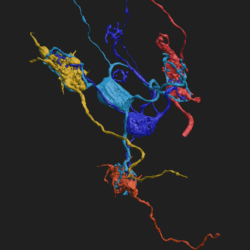 Many of us have seen microscopic images of neurons in the brain — each neuron appearing as a glowing cell in a vast sea of blackness. This image is misleading: Neurons don’t exist in isolation. In the human brain, some 86 billion neurons form 100 trillion connections to each other — numbers that, ironically, are Read more about A new field of neuroscience called connectomics[…]