Implicit racial bias refers to the automatic non-conscious behaviours, even if one’s explicit attitude is not biased at all. Several studies have shown these prejudices are reduced in white people after being in the body of a black person in virtual reality. Now, a study carried out by researchers of the University of Barcelona shows that when the virtual scenario is affectively negative, implicit bias increases, and even the illusion of owning a virtual body is lessened. Researchers argue that negative affect prevents the formation of new positive associations with black, and distress leads to disownership of the virtual body. These results, published in the journal Royal Society Open Science, challenge the vision of virtual reality as an empathy machine and may have implications in the way virtual reality should be used to reduce implicit biases. 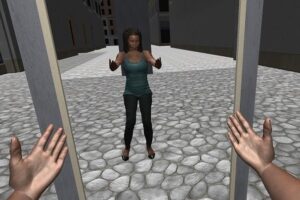 In the new experiment, 92 white female participants stood in a virtual street embodied either in a white or black body, with crowds of virtual people walking by.
CREDIT
D. Banakou et al. Royal Society Open Science

The study was led by Mel Slater, researcher at the Institute of Neuroscience of the UB (UBNeuro) and co-director of the Event Lab research group. The first author of the study was postdoc researcher Domna Banakou with Alejandro Beacco, Solène Neyret, Marta Blasco-Oliver, and Sofia Seinfeld (IDIBAPS).

Reacting against a hostile environment

Virtual reality can be used to change the type of body you have, called avatar. This effect is achieved wearing the VR head-mounted display, and thanks to the synchronous real-virtual body movement. A lot of previous research has shown that you would typically have the illusion that the virtual body was ours, even though we know for sure that it is not. This is called a ‘body ownership illusion’ and it is surprisingly the same whether you have a white virtual body or a black one.

An interesting result that has been replicated several times is that if a white person has a virtual body that is black, after only a few minutes of this experience, the implicit racial bias of white participants against black people decreases. It has even been shown that this lasts for at least a week after the virtual reality experience. In this new study, researchers changed the environment of this classic experiment and have found interesting exceptions to these previous findings. “In the previous studies nothing special was happening during the virtual reality exposure – it was taken as emotionally neutral or positive by participants. Here we changed adding a negative environment”, said Slater.

This led to negative, neutral or positive feelings by the participants. For those who experienced the neutral or positive crowd the same results as previously found were replicated – participants had the same level of body ownership whether in the white or black body, and the implicit racial bias of those in the black body decreased. However, they found that if the crowd behaved negatively then those in a white body actually had a lower degree of body ownership than those in the neutral or positive surrounding social situation. “It is as if the person was feeling that this situation could not happen to her/him, so this can’t be her/him”, notes Slater. Additionally, in a negative social situation, those with the Black body showed an increase in their implicit bias rather than a decrease as in earlier studies. The researcher highlights that this may be because “their negative feelings do not allow the formation of new learnings, new associations between black and positive attributes”.

These results suggest caution regarding considering virtual reality as an empathy machine -that is, you can put people in the situation of disadvantaged groups or minorities who are discriminated against- and this will somehow automatically increase their empathy towards those groups. “The problem is that the typical empathy machine approach is to put people in the body of a racial outgroup, and in that body subject them to various indignities, in the expectation that this might increase their empathy towards members of that group. What we have shown is that this approach can be counter-productive. If they feel bad during the experience, then this could make things worse,” adds Slater.

Despite these results, the research study has shown that immersive virtual reality is useful against implicit racial bias. “Our findings show that reducing implicit racial bias through embodiment does work when the surrounding situation is either a neutral one, or one that induces positive feelings. This result has been replicated many times, including in this new paper. So, being embodied in the body of an ‘out-group’ but in a positive social situation is a way to reduce bias. Also, to have positive social contact in VR with virtual humans representative of the out-group has been shown to enhance positive relations,” said Slater.