The EIB and Volvo Car Corporation have signed a EUR 245 million loan agreement backing research and development activities in connectivity, efficient petrol hybrid engines, longer-range electric cars and advanced driving assistance systems. The EIB transaction with Volvo Cars was made possible by the European Fund for Strategic Investments (EFSI), which is the central pillar of the Investment Plan for Europe. It was founded by the EIB Group and the European Commission to boost the competitiveness of the European economy. 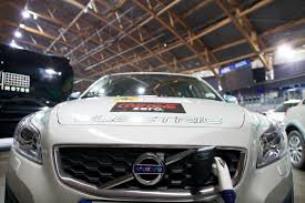 The EIB loan will help to finance four research and development projects addressing these challenges. The first concerns the development of new energy-efficient engines and is related to petrol-operated engines only. The second project focuses on active safety systems and functions such as collision avoidance and improved driver assistance features. The third encompasses the development of a new connectivity and infotainment platform, which will introduce a new emergency call feature, and improved navigation. The last project aims at the development and production of a new “Battery Electric Vehicle” by 2019.

European Commission Vice-President Jyrki Katainen, responsible for Jobs, Growth, Investment and Competitiveness, said: “The Investment Plan for Europe is boosting innovation throughout Europe, and today’s announcement is yet another example. This research and development project by Volvo will push the boundaries of automotive technology in Europe and take us another step closer to a low carbon economy.”

“We are happy to support a European car maker in addressing the disruptive technology shifts towards e-mobility and autonomous driving. Volvo Cars’ research and development projects will contribute to making their cars safer, cleaner and greener, which benefits us all,” said EIB Vice-President Alexander Stubb, responsible for EIB operations in Northern European countries.

The automotive industry is facing a number of challenges, as high investments are required in new technologies. At the same time, competition from other players outside the traditional industry is increasing.

The research projects are located in Volvo Cars’ technical centres in Sweden and will be developed for autonomous or semi-autonomous vehicles. The EIB-supported R&D programme will assist Volvo Cars in complying with CO2 requirements and regulations beyond 2020.

The European Investment Bank (EIB) is the long-term lending institution of the European Union owned by its Member States. It makes long-term finance available for sound investment in order to contribute towards EU policy goals. In 2016 alone, the Bank made available nearly EUR 1.7 billion in loans for Swedish projects.

About the Investment Plan for Europe

The Investment Plan for Europe focuses on strengthening investments to create jobs and growth within Europe. It does so by making smarter use of new and existing financial resources, removing obstacles to investment, providing visibility and technical assistance to investment projects. An independent investment committee selects which projects should receive the support of the European Fund for Strategic Investments (EFSI) using criteria set out in the EFSI Regulation.

The projects and agreements approved for financing under the EFSI so far are expected to mobilise EUR 241 billion in investments and support around 460,000 SMEs across all 28 Member States. On 13 September, the European Parliament and Member States came to an agreement in principle on the extension and strengthening of the EFSI. This agreement extends the EFSI’s duration and increases its financial capacity.