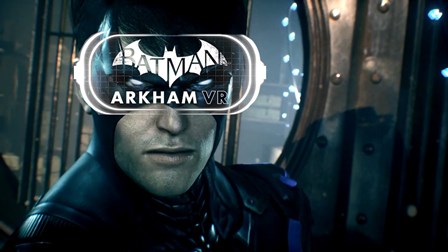 “Batman: Arkham VR” is the first virtual reality experience to immerse players into the Dark Knight’s universe, putting them inside the Batman’s cowl like never before. PC players with HTC Vive and Oculus Rift hardware will now have the opportunity to experience Gotham City through the eyes of the World’s Greatest Detective, and delve deep into a tense Batman: Arkham mystery. Players will enter a virtual reality world where they must think like Batman and utilize his legendary gadgets, unraveling a plot that threatens the lives of his closest allies.

“Bringing Batman to VR was a very rewarding experience for us here at Rocksteady. The Dark Knight has always been an incredible character to work with due to his psychological depth, so it’s really exciting to use this immersive medium to delve deeper into his psyche than ever before” said Sefton Hill, Creative Director, Rocksteady Studios. “We’re thrilled that PC players can finally wear the cowl for themselves and take on the role of the World’s Greatest Detective with the addition of the HTC Vive and Oculus Rift versions.”

“Batman: Arkham VR” will support both the Oculus Touch and Vive Controllers, and also have full gamepad support on PC, including the PS4 Dual Shock 4 Controller, Xbox One Controller and the Steam Controller.

About DC Entertainment:
DC Entertainment, home to iconic brands DC (Superman, Batman, Green Lantern, Wonder Woman, The Flash, etc.), Vertigo (Sandman, Fables, etc.) and MAD, is the creative division charged with strategically integrating across Warner Bros. and Time Warner. DC Entertainment works in concert with many key Warner Bros. divisions to unleash its stories and characters across all media, including but not limited to film, television, consumer products, home entertainment, and interactive games. Publishing thousands of comic books, graphic novels and magazines each year, DC Entertainment is one of the largest English-language publishers of comics in the world.

About Rocksteady Studios Ltd:
Rocksteady Studios is a multi-award winning videogame developer based in London, England. Located in a spacious, purpose built converted factory, with full motion capture and audio studio capabilities, we are an energetic company formed by a core team of senior industry professionals. This gives us an ideal balance of drive, talent, proven methods, experience and cutting edge technology to make AAA games. Now employing 160 people, Rocksteady’s mission is to be a highly professional, efficient company whose purpose is to make great games, and have happy and healthy team members. This philosophy is the heart and soul of our company. Rocksteady received the coveted ‘studio of the year’ award at the 2009 VGA awards.