Keeping things constantly connected to the internet costs energy — a lot of energy. Even small Internet-of-Things nodes run out of battery entirely in just a few weeks. All of this is changing with the RFicient® chip, developed by the Fraunhofer Institute for Integrated Circuits IIS, which saves power consumption by up to 99 percent. This development is a big step forward for the Internet of Things and has secured the Joseph von Fraunhofer Prize for the developer team. 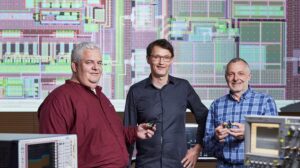 Heaters and coffee machines that can be turned on or off using an app while on the move or on the couch? Waste containers with built-in fill level sensors that can autonomously detect when they need to be emptied and report this to waste collectors? Those are just two striking examples from the Internet of Things, or IoT: objects that are connected to the internet and send data to each other. The number of these wirelessly networked devices is growing rapidly, both among private consumers and in industry. For devices to be available at all times, however, their wireless receiver needs to be permanently switched on, which limits the battery life of small, battery-powered IoT nodes to just a few weeks.

A hundred times the battery life with prompt response times

The RFicient® chip, developed by the Fraunhofer Institute for Integrated Circuits IIS, represents a huge leap forward. “Our chip enables us to save up to 99 percent of power — so a battery that would have managed just over a month with conventional technology can now last ten years,” says Dr. Frank Oehler enthusiastically. The appeal of this product lies in the fact that, even with the extended battery life, the sensor node is still ready to receive signals at any time: it needs just 30 milliseconds to respond by performing an action. While other wake-up receivers are often switched off for minutes at a time and can sometimes take too long to respond, the RFicient® chip guarantees an immediate response. This is important not only in time-critical applications, but also in situations where there are many services running simultaneously or many different nodes being queried — such as at airports, train stations or football stadiums.

This market-ready product, along with the registration of 16 patent families, has secured the Joseph von Fraunhofer Prize for the entire team, represented by Dr. Frank Oehler, Dr. Heinrich Milosiu and Dr. Markus Eppel. The jury was impressed not only by the entire process chain from idea to implementation, but also and above all by the chip’s particular societal relevance in light of the soaring numbers of wirelessly networked devices and the associated consumption of energy and resources.

The RFicient® technology has now been developed from an initial idea into a commercially available standard chip.  The US semiconductor manufacturers Globalfoundries Inc., RoodMicrotec GmbH and EBV Elektronik GmbH & Co. KG have also been welcomed on board as industry partners. “What the industry needs is IoT receivers that are always available and quick to respond — and that continue working for a long time without needing to be maintained. Thanks to the new Fraunhofer receivers, we can now deliver this for the first time ever,” says Thomas Staudinger, President of EBV Elektronik GmbH. Dr. Oehler is excited about the interest from industry: “We have been bombarded with over 100 inquiries from various application areas: Our customers are already eager to equip their new products with RFicient®.” Conservative estimates suggest that over 50 million IoT devices will benefit from the RFicient® technology in the coming years. Its developers have put their finger on the pulse of the current age in two ways: by opening up a vast new area for the Internet of Things, and by moving sustainability forward.