OTM Technologies Ltd. announced today that Phree, the world’s first unrestricted, high resolution, write-virtually-anywhere mobile input device, is now available for pre-orders on Indiegogo’s InDemand platform. Following a very successful campaign on Kickstarter, raising over $1,000,000 from 5,000+ backers, and seeing a continuous demand by those who missed the Kickstarter campaign, OTM Technologies decided to allow additional pre-orders on Indiegogo InDemand. Phree is available for $198 and Phree + Case for $249. 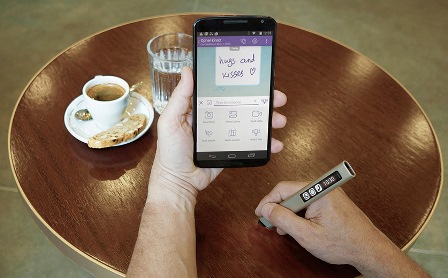 Phree is a pen-shaped mobile input device that enables full interaction with any digital screen with a Bluetooth connection. Phree is used for continuous screen navigation and selection, sketching and drawing, text input and editing, game playing, signing and more with a single intuitive device. The proprietary optical sensor technology developed by OTM Technologies tracks the motion of Phree across any surface and streams it to the target device, in real time. Unlike traditional styluses, Phree uses patented laser technology to deliver an unprecedented level of motion tracking accuracy to display notes, drawings, and more to your smartphone, tablet, PC, TV and even smartwatch and VR goggles in high-definition. By enabling writing off the screen, Phree allows an unobscured view of the screen (touchscreen or not). It is compatible with software and apps like Office, OneNote, EverNote, Acrobat, Google Handwriting Keyboard, Viber and more.

“We are thrilled to welcome additional backers to join the Phree campaign on Indiegogo and be able to pre-order this amazing device that will change the way people interact with the digital world” said Gilad Lederer, OTM Technologies co-CEO “Our experienced team has the know-how and discipline required to deliver Phree into the hands of our backers and to take it from prototype to product on schedule, with the right production partners.”

OTM Technologies Ltd., founded by Gilad Lederer, Dr. Opher Kinrot and Uri Kinrot in Tel Aviv, is a consumer electronics company providing a new way to interact with the digital world, anywhere. Their patented technology, Optical Translation Measurement (OTM), uses a 3D laser interferometer sensor to measure relative motion to any surface and produce a natural digital capture in high-definition. OTM’s first product, Phree, is an advanced smart writing tool that captures handwriting digitally from nearly any surface and beams it to a user’s digital screen.