An exciting milestone has been reached in the development of the world’s first commercial scale floating wind farm, which on completion will be sited off the coast of Aberdeenshire, Scotland.

All five wind turbines, each with a capacity of six megawatts (MW), have been mated onto a floating substructure in Stord, Norway, ready to be towed into position 25 kilometres out to sea from the Scottish town of Peterhead and then anchored to the seabed. 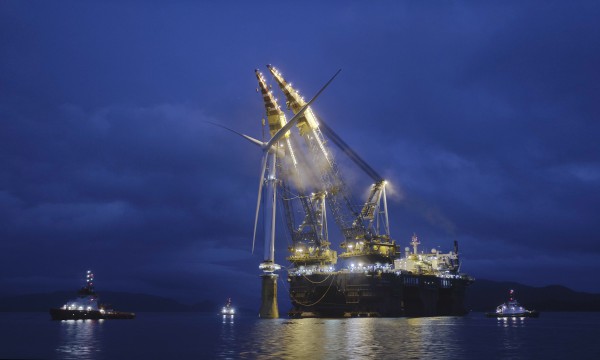 Masdar’s acquisition of a 25 per cent stake in the project was announced during Abu Dhabi Sustainability Week in January, with lead operator Statoil owning 75 per cent.

The 30MW wind farm will occupy four square-kilometres of space in an area of the North Sea which records average wind speeds of 10 metres per second. Upon completion in the fourth quarter of 2017, the project will provide around 22,000 UK homes with renewable electricity.

“We are excited to see the world’s first commercial scale floating offshore wind farm move a step closer to completion, demonstrating our long-term commitment to advance the commercialisation of renewable energy technologies,” said Mohamed Jameel Al Ramahi, Chief Executive Officer (CEO) of Masdar. “The deployment of commercially viable wind energy in deep water marks a new era of growth for wind power, allowing countries to further diversify their energy mix. We are proud to extend Masdar’s renewable energy portfolio in the United Kingdom and to build on our close partnership with Statoil.”

Demonstrating cost efficient and low risk solutions for future large-scale floating wind farms, Hywind Scotland is the second offshore wind partnership between Masdar and Statoil after the 402MW Dudgeon wind farm, also due to come on-stream by the second half of 2017.

Installing, or “mating”, the five Hywind wind turbines onto their floating platforms is a staggering feat of engineering, with each turbine tower weighing 12,000 tonnes. The diameter of the rotor blades is 154 metres, nearly twice the wingspan of an Airbus A380, while the turbines themselves stand 253 metres tall (with 78 metres below the water surface). That is nearly three-quarters the height of the Eiffel Tower.

Hywind Scotland is set to be in full production by the end of 2017.