Shita began working on his single-algorithm, federated approach to artificial intelligence in 2005, and Kimera Systems was formally incorporated in 2012.  The technology was dubbed “Nigel” to honor one of its principal architects, Nigel Deighton, a noted international expert on wireless technologies and a former Gartner research vice president, who passed away in 2013.

Kimera has validated Nigel’s ability to learn and react to various situations and contexts, a breakthrough achievement in artificial intelligence coming decades before most experts predict such AI technology could be ready for commercial deployment.  After years of development and laboratory testing, Nigel has finally been rolled out to a select group of private beta users so the technology can begin to gather data and begin learning in the real world. A public beta will soon be available. 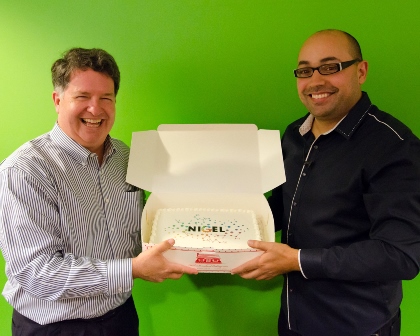 “There are billions of connected devices and objects people call ‘smart,’ but ‘smart’ does not include comprehension,” said Shita. “Personal assistant apps found on most smartphones are ‘smart’ but have limited utility because they are programmed to react in specific ways, and are constrained by this programming. You cannot ask your smartphone ‘is everyone there?’ and expect it to give you an answer relevant to your situation at that moment. Because Nigel will understand this question, it can give you a meaningful answer.”

From Smart to Intelligent

As an artificial general intelligence technology, Nigel represents a new approach that fuses together a broad range of hard and soft sensor data, achieving moment-to-moment contextual awareness that allows Nigel to learn and apply what it understands to real-world situations. Rather than a centralized “brain” or knowledge bank, Nigel learns through an ever-growing neural network with nodes that can extend to any type of connected device. As more people use Nigel-enabled apps and devices, its understanding of concepts accelerates, allowing the technology to recognize user needs based on location, calendar and contact entries, time of day, environments, and more.

Early testing of Nigel demonstrated its unique potential to help people achieve goals and solve problems. The Nigel technology was set up on the phones for all attendees of a meeting, but one meeting participant was running late. The late person texted another attendee with the message “is everyone there?” That attendee had switched his phone to silent and never saw the message. But, because it was installed on all participants’ smartphones and could see location and calendar data, Nigel was able to understand the context of the question and automatically respond with a text to the late party, “everyone is here except you.”

In a test conducted during a Super Mobility Week expo in Las Vegas, Nigel learned whether a person had a particular kind of food preference or sensitivity. If a person paused in front of a restaurant, Nigel would automatically call up and display a filtered menu of that location on the person’s smartphone, listing only menu options based on the individual’s preferences that Nigel observed and learned.

Data gathered via Nigel are encrypted and stored in “personal clouds” and no private information ever leaves the control of the person to whom it belongs. Personal clouds are even kept private from Kimera Systems and other personal clouds. Kimera is working with app developers, device manufacturers and network operators to integrate Nigel and enable an ecosystem of end-user value exponentially greater than anything else currently available.

About Kimera Systems
Kimera Systems is the developer of Nigel™ – the world’s first human-like artificial intelligence technology that makes networked “smart” devices intelligent. As Nigel learns, it becomes aware of people’s personal needs and understands the context of their activities. With this awareness, Nigel transforms passive apps and devices, which today require user inputs, into a dynamic services environment that constantly adapts to people’s needs. Nigel proactively launches apps and delivers information to assist people in their everyday lives.