The wearables market in 2015 experienced ups and downs, but, overall, the market continues to be very promising, with fitness trackers and smart watches being the main drivers of volume and growth.  Wearable device unit shipments achieved higher than expected growth in 2015, especially in the fitness tracker segment, in which unit sales have doubled since 2014.

According to a new report from Tractica, annual wearable device shipments will increase from 85.0 million units in 2015 to 559.6 million units by 2021, representing a compound annual growth rate (CAGR) of 36.9%. 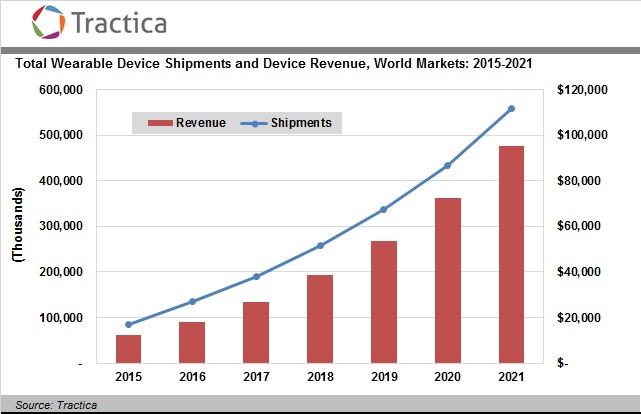 The market intelligence firm has upgraded its wearable device shipment and revenue forecasts significantly since the last edition of its forecast in early 2015, driven by three key factors:

“2015 was the biggest year for wearables by far, with fitness trackers outperforming industry expectations and smart watches coming out strong,” says research director Aditya Kaul.  “While fitness is the overwhelming driver for wearables today, there are a number of micro-segments emerging, ranging from kids’ watches to smart footwear to new healthcare devices like wearable patches, that will drive this market forward.”

Tractica’s report, “Wearable Device Market Forecasts”, examines the market trends for wearable devices and presents 6-year market data and forecasts for wearable device shipments and revenue during the period from 2015 through 2021.  The extensive and granular market data model covers a number of wearable device types including smart watches, fitness trackers, smart glasses, smart clothing, body sensors, wearable cameras, and other wearables like location trackers, smart jewelry, and gesture control devices. An Executive Summary of the report is available for free download on the firm’s website.