Predictions from quantum physics have been confirmed by countless experiments, but no one has yet detected the quantum physical effect of entanglement directly with the naked eye. This should now be possible thanks to an experiment proposed by a team around a theoretical physicist at the University of Basel. The experiment might pave the way for new applications in quantum physics.

Quantum physics is more than 100 years old, but even today is still sometimes met with wonderment. This applies, for example, to entanglement, a quantum physical phenomenon that can be observed between atoms or photons (light particles): when two of these particles are entangled, the physical state of the two particles can no longer be described independently, only the total system that both particles form together.

Despite this peculiarity, entangled photons are part of the real world, as has been proven in many experiments. And yet no one has observed entangled photons directly. This is because only single or a handful of entangled photons can be produced with the available technology, and this number is too low for the human eye to perceive these photons as light.

Nicolas Sangouard, a theoretical physicist at the University of Basel, together with two quantum physicists from Delft, Netherlands, and Innsbruck, Austria, has now shown in the scientific journal Optica how it may be possible to detect entangled photons directly. The basic idea of the experiment is that an entangled photon is generated and then amplified using a special technique, without destroying the quantum physical entanglement.

In the process, about 100 entangled photons are present, which, according to current knowledge, is the precise number needed to create the impression of light in humans. But although hundreds of photons reach the retina, there are also significant losses: only about seven actually reach one of the 120 million light-detecting rods of the retina. These photons then generate the nerve impulse that triggers the perception of light in the brain. 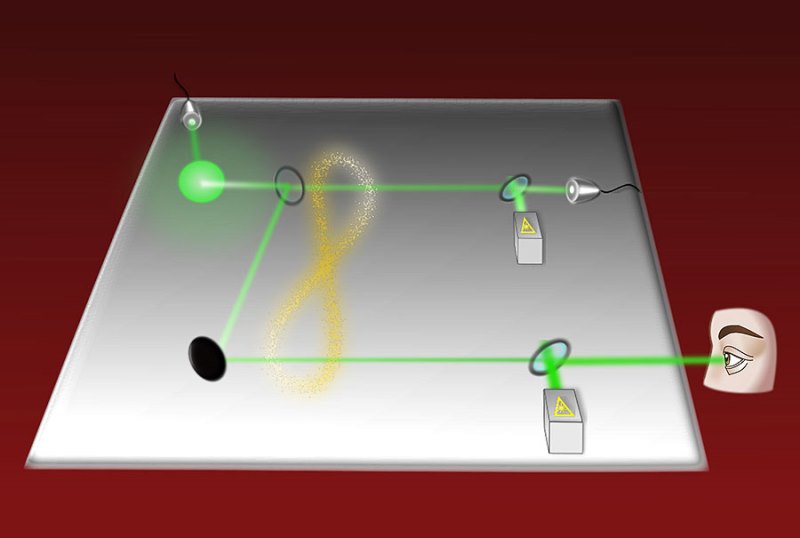 Photon pairs are produced with a source (green point). A photon from each pair is emitted upwards; the other is directed into a semi-transparent mirror (black circle). Following the mirror, the photon exists in two entangled states (symbolized by the yellow figure of eight). The photon is then detected by a detector (top right) or by the eye of the human observer (bottom right). In order for the photons to be detectable by the human eye, they are amplified by laser beams (boxes with yellow triangle symbol). The amplitude and phase of the laser beams can be changed during each run of the experiment, with the result that either the detector or the eye can detect the light pulse, and sometimes both simultaneously or neither at all. Through statistical analysis of the perception of light, quantum physicists can then infer the existence of quantum entanglement. (Illustration: Valentina Caprara Vivoli)

In the experiment proposed by the three quantum physicists, entanglement is created by a single photon directed at a semi-transparent mirror. Sangouard explains what happens next: “The single photon is not transmitted or reflected by the mirror; instead – quantum physics is strange – the photon is simultaneously transmitted and reflected. Behind the mirror, the photon exists in a ‘transmitted’ and ‘reflected’ state, whereby these two states are entangled with another.”

A photon detector and a human observer are placed behind the mirror. In order for the observer’s eye to detect the entangled photons, they are amplified 100-fold with a type of magnifying glass before they reach the eye. Technically speaking, this is achieved by a displacement in phase space using a laser. Whether the human observer and/or the detector actually detect the entangled photons is not revealed directly but rather through determination of the probabilities. For this, the experiment is repeated many times and the data obtained statistically analyzed.

It is not yet certain if Sangouard’s group will conduct the experiment or if other quantum physicists will implement it. The required technologies – special photon sources and special lasers – are generally available today; however, the biggest obstacle is the practical implementation of the experiment. The human eye is about a billion times slower at counting weak light pulses than modern photon detectors. “According to an initial estimate, several hundreds of thousands of runs would be necessary until we have enough data to determine if we’ve actually detected entangled photons. This means that the test person in our experiment would have to note at one-second intervals over the course of several hundreds of hours if they have just detected a light pulse or not.”

If these obstacles were overcome, the experiment would demonstrate that the human eye is able to detect quantum entanglement directly and achieve what until now has required complicated and expensive detectors. Scientists are currently working to use the principle of entanglement to build secure digital communication links and for quantum computers. According to Sangouard, these applications could benefit from the new experiment.

The research project is supported by the Swiss National Science Foundation as part of the National Center of Competence in Research in Quantum Science and Technology (NCCR-QSIT) and the John Templeton Foundation in the US.

Valentina Caprara Vivoli, Pavel Sekatski, and Nicolas Sangouard
What does it take to detect entanglement with the human eye?
Optica (2016), doi: 10.1364/optica.3.000473