Researchers at Lund University in Sweden have utilised nanotechnology to create a biological computer that can solve certain mathematical problems far faster and more energy-efficiently than conventional electrical computers. The research results have now been published in the prestigious publication Proceedings of the National Academy of Sciences (PNAS). 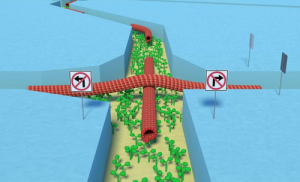 Conventional computers have contributed to major advances for society over the past few decades, but have a weakness: they can only do one thing at a time. The more arithmetic operations a problem requires, the longer it takes to perform the calculations. This means that electronic computers are not efficient in dealing with combinatorial problems, for example in cryptography and mathematical optimisation, which require the computer to test a large number of different solutions.

However, nanotechnology researchers at Lund are on the track of a solution. They have shown that a parallel computer utilising molecular motors can find all the correct solutions to a combinatorial problem, rapidly and energy-efficiently.

Parallel computers perform several calculations simultaneously, instead of sequentially, which in theory makes them extremely fast at solving combinatorial problems. Up to now the limiting factors for parallel computers have been scalability and practical implementation.

Molecular motors are large molecules that carry out mechanical tasks in living cells. One example, myosin, is found in our muscle cells. Outside the cell myosin can be used to move protein filaments, composed of actin, along artificial paths, which direct the filaments’ movements.

“In simple terms, it involves the building of a labyrinth of nano-based channels that have specific traffic regulations for protein filaments. The solution in the labyrinth corresponds to the answer of a mathematical question, and many molecules can find their way through the labyrinth at the same time”, says Heiner Linke, director of NanoLund and coordinator of the parallel computer study.

Biological computers use a strategy similar to that of so-called quantum computers. Quantum mechanics uses qubits – ones and zeroes – whereas biocomputers use molecules that work in parallel.

“The fact that molecules are very cheap and that we have now shown the biocomputer’s calculations work leads me to believe that biocomputers have the prerequisites for practical use within ten years. Certainly, quantum computers can be more powerful in the long term, but there are considerable practical problems involved in getting them to work”, states Heiner Linke.

“Another big advantage is that molecular motors are very energy efficient. A biocomputer requires less than one per cent of the energy an electronic transistor needs to carry out one calculation step”, he adds.

The current study showed the solution to a well-known combinatorial problem, ‘Subset Sum Problem’. Compared with a sequential computer, a parallel computer can take a drastically shorter time to test all the solutions for a problem. (In mathematical terms: N^2 compared with 2^N, where N represents the size of the problem).

To read the full article “Parallel computation with molecular-motor-propelled agents in nanofabricated networks” by Dan Nicolau Jr et al in the Proceedings of the National Academy of Sciences (PNAS):http://www.pnas.org/content/early/2016/02/17/1510825113

This research was funded by: The European Union Seventh Framework Programme; Defense Advanced Research Projects Agency; by NanoLund; by the Miller Foundation; by the Swedish Research Council; The Carl Trygger Foundation, German Research Foundation within the Cluster of Excellence Center for Advancing Electronics Dresden and the Heisenberg Program; and by Linnaeus University.