The dynamics of many electrons interacting with each other governs a variety of important physical and chemical phenomena such as superconductivity, magnetism, and chemical reactions. An ensemble of many particles thus interacting with each other is referred to as a “strongly correlated system”. Understanding the properties of strongly correlated systems is thus one of the central goals of modern sciences. It is extremely difficult, however, to predict theoretically the properties of a strongly correlated system even if one uses the post-K supercomputer3), which is one of the world’s fastest supercomputers planned to be completed by the year 2020 in a national project of Japan. For example, the post-K cannot exactly calculate even the energy, which is the most basic property of matter, when the number of particles in the system is more than 30. Instead of calculating with a classical computer such as the post-K, an alternative concept has been proposed and referred to as a “quantum simulator”, in which quantum mechanical particles such as atoms are assembled into an artificial strongly correlated system, whose properties are known and controllable. It is then used to simulate and understand the properties of another strongly correlated system, whose properties are not known. A quantum simulator could simulate quantum mechanical behavior of many particles that cannot be handled even by the post-K, expected to become a next-generation simulation platform to replace supercomputers. Huge investment to the development of quantum simulators has therefore been started recently in national projects of various countries including US, EU, and China.

The team has developed a completely new quantum simulator that can simulate the dynamics of a strongly correlated system of more than 40 atoms within one billionths of a second.  This has been realized by introducing a novel approach in which an ultrashort laser pulse whose pulse-width is only 100 billionths of a second is employed to control a high-density ensemble of atoms cooled down to temperatures close to absolute zero5). Furthermore they have succeeded in simulating the motion of electrons of this strongly correlated system that is modulated by changing the strength of interactions among many atoms in the ensemble.

This “ultrafast quantum simulator” is expected to develop into a fundamental tool that supports designing future functional materials and drug molecules, and to serve as a basic tool to investigate the origin of physical properties of matter including superconductivity and magnetism.

The team has succeeded in solving those two essential problems for the first time. Below figure shows a property of laser light that has so far been used typically for the development of a quantum simulator. It shines continuously as shown in Fig.  and is produced by a so-called “continuous wave laser”. This laser light has an extremely narrow range of wavelength (energy) as shown in Fig. (a-2). Therefore it cannot bring an electron to the Rydberg orbital that is shifted energetically in the surrounding atom. Instead of using this continuous wave laser, therefore, the team has introduced a pulsed laser light that shines only during 10 picoseconds as shown in Fig. (b-1). This pulsed laser light has its wavelength range broader than that of the continuous wave laser by a factor of more than one million as shown in Fig. (b-2). It can therefore bring an electron to the Rydberg orbital even if its energy is shifted in the surrounding atom. Moreover the temporal width of the laser pulse is one tenth of the timescale expected for the temporal evolution of the system, so that the evolution should be able to be observed in real time. 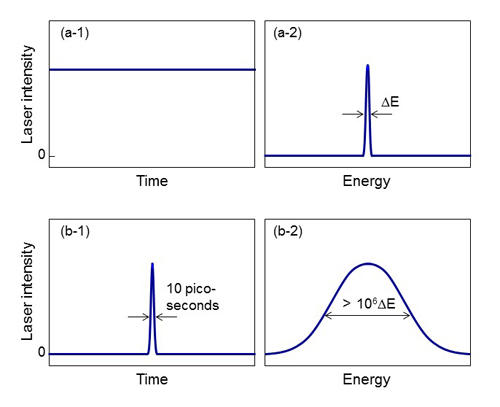 Fig. Properties of conventional laser light that has so far been used for the development of a quantum simulator (a-1, a-2) and of the one newly introduced by the team (b-1, b-2).

Moreover the temporal width of the laser pulse is one tenth of the timescale expected for the temporal evolution of the system, so that the evolution should be able to be observed in real time.

The experiment was performed with rubidium atoms. Below Fig. shows a schematic of the experiment. An ensemble of 106 rubidium atoms was cooled down to an ultralow temperature around one hundred thousandth of an absolute temperature 1 Kelvin with laser cooling techniques and trapped in a laser tweezer. These atoms were irradiated with an “ultrashort laser pulse 1” whose pulse width was 10 picoseconds, and its wavelength range was appropriately manipulated with a special technique. The temporal evolution of the atoms after laser pulse 1 was observed with another “ultrashort laser pulse 2”. The delay of laser pulse 2 from laser pulse 1 was controlled ultra-precisely on the 10 attosecond timescale (atto = 10-18) with a special device, so that the evolution was observed on this timescale. It was then observed in real time that the electrons of many Rydberg atoms, which were generated with laser pulse 1 that circumvented Rydberg blockade, oscillated with a period of one femtosecond (femto = 10-15), and the timing of those oscillations was gradually shifted on the timescale of 10 attoseconds due to the simultaneous interactions among more than 40 Rydberg atoms. Furthermore this timing shift has successfully been accelerated by enlarging the Rydberg orbitals or by decreasing the distances among Rydberg atoms to increase the strength of the interactions.

Fig. Schematic of the experimental setup

It has been demonstrated that the ultrafast quantum simulator developed by the team can quickly simulate the dynamics of a strongly correlated system of a large number of particles interacting with each other, which cannot be handled by even the post-K supercomputer. The ultrafast quantum simulator is expected to develop into a future simulation platform that can contribute to designing superconducting and magnetic materials and drug molecules, whose functionalities are governed by strongly correlated electrons. It is also expected to serve as a fundamental tool to investigate the origins of physical properties of matter such as superconductivity and magnetism as well as the mechanism of a chemical reaction that proceeds in a complex environment such as a liquid.