New experiments have shown that it is possible for extremely high currents to pass through graphene, a form of carbon. This allows imbalances in electric charge to be rapidly rectified. 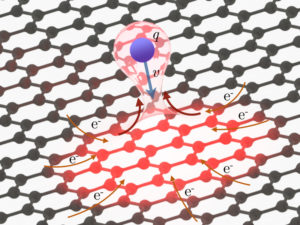 The strong electric field of the highly charged ions is able to tear dozens of electrons away from the graphene within a matter of femtoseconds. However, because graphene is able to transport high electric currents, the positive charge can be rapidly neutralised.

Once again, graphene has proven itself to be a rather special material: an international research team led by Professor Fritz Aumayr from the Institute of Applied Physics at TU Wien was able to demonstrate that the electrons in graphene are extremely mobile and react very quickly. Impacting xenon ions with a particularly high electric charge on a graphene film causes a large number of electrons to be torn away from the graphene in a very precise spot. However, the material was able to replace the electrons within some femtoseconds. This resulted in extremely high currents, which would not be maintained under normal circumstances. Its extraordinary electronic properties make graphene a very promising candidate for future applications in the field of electronics.

The Helmholtz-Center Dresden-Rossendorf and the University of Duisburg-Essen participated in the experiment alongside TU Wien. The international team received theoretical support from Paris and San Sebastian as well as from in-house staff (Institute of Theoretical Physics at TU Wien).

‘We work with extremely highly-charged xenon ions,’ explains Elisabeth Gruber, a PhD student from Professor Aumayr’s research team. ‘Up to 35 electrons are removed from the xenon atoms, meaning the atoms have a high positive electric charge.’

These ions are then fired at a free-standing single layer of graphene, which is clamped between microscopically small brackets. ‘The xenon ion penetrates the graphene film, thereby knocking a carbon atom out of the graphene – but that has very little effect, as the gap that has opened up in the graphene is then refilled with another carbon atom,’ explains Elisabeth Gruber. ‘For us, what is much more interesting is how the electrical field of the highly charged ion affects the electrons in the graphene film.’

This means that electrons are now missing from the graphene layer, so the carbon atoms surrounding the point of impact of the xenon ions are positively charged. ‘What you would expect to happen now is for these positively charged carbon ions to repel one another, flying off in what is called a Coulomb explosion and leaving a large gap in the material,’ says Richard Wilhelm from the Helmholtz-Center Dresden-Rossendorf, who currently works at TU Wien as a postdoctoral assistant. ‘But astoundingly, that is not the case. The positive charge in the graphene is neutralised almost instantaneously.’

This is only possible because a sufficient number of electrons can be replaced in the graphene within an extremely short time frame of several femtoseconds (quadrillionths of a second).

‘The electronic response of the material to the disruption caused by the xenon ion is extremely rapid. Strong currents from neighbouring regions of the graphene film promptly resupply electrons before an explosion is caused by the positive charges repelling one another,’ explains Elisabeth Gruber. ‘The current density is around 1000 times higher than that which would lead to the destruction of the material under normal circumstances – but over these distances and time scales, graphene can withstand such extreme currents without suffering any damage.’

Ultra-fast electronics
This extremely high electron mobility in graphene is of great significance for a number of potential applications: ‘The hope is that for this very reason, it will be possible to use graphene to build ultra-fast electronics. Graphene also appears to be excellently suited for use in optics, for example in connecting optical and electronic components,’ says Aumayr.