For the second year in a row, the survey revealed near saturation of education technology; however, 2016 figures show that adoption of open educational resource in particular appears to be accelerating, with 73% of survey respondents reporting that they now use open resources more often than textbooks.

Adoption of OER has been buoyed by teacher word-of-mouth, as well as recent regulatory shifts. Earlier this year, the U.S. Department of Education issued new regulation that requires all copyrightable intellectual property created with grant funds to have an open license. According to a 2015 report from Hewlett, Creative Commons-licensed works have increased from 50 million in 2006 to 1.18 billion in 2015. 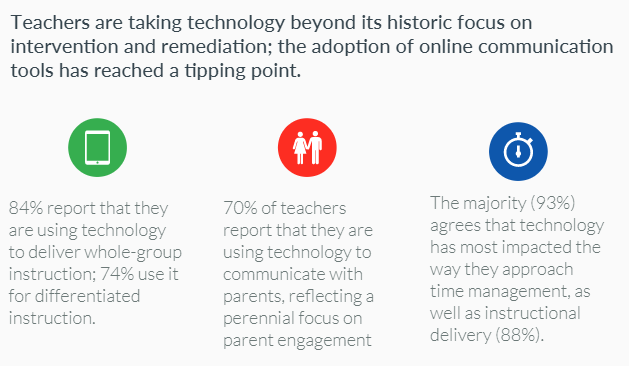 “We are thrilled to see improvements around access to technology and high-quality open resources,” said Rob Grimshaw, chief executive officer of TES Global. “Arming teachers with the tools they need to succeed is the right way to ensure that innovative technologies can impact student performance.”

About TES Global
TES Global (www.tesglobal.com)is a digital education company that has been supporting educators for over 100 years. Its mission is to help teachers, schools and universities to develop and deliver the best education. TES is home to the world’s largest online community of teachers, with over 8 million registered users, downloading 1 million classroom resources every day across its global marketplace.
Source: TES Global