The Consorci de la Zona Franca de Barcelona, organiser of SIL – the world’s largest trade fair encompassing the entire logistics chain – and the Federation of National Associations of Freight Forwarders and International Logistics Operators of Latin America (ALACAT) have just announced that the 39th edition of the ALACAT Congress will take place in Barcelona (Spain) within the framework of SIL 2023. The agreement was signed during the celebration of the ALACAT 2022 Congress held this week in Mexico, and was made official at the closing of the congress with the traditional flag passing ceremony attended by the President of ALACAT, Moisés Solís, the special delegate of the State
at CZFB, Pere Navarro, and the CEO at CZFB, Blanca Sorigué. 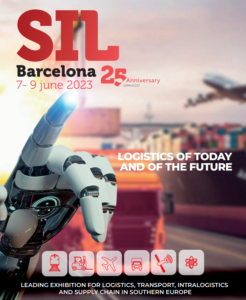 The ALACAT Congress is the largest congress held in Latin America and in 2023 it will be held in Barcelona to coincide with a very special edition of SIL, its 25th anniversary. This will build bridges of business and exchange of knowledge and experience between Hispanic and European logistics with the presence of more than 1,000 professionals. It is worth remembering that the ALACAT Congress will be held in Spain in the 2016 and 2019 editions of SIL. Precisely, the last of them, in SIL 2019, coincided with a very powerful edition where the “Barcelona Declaration” was signed, in favour of cooperation and economic development, with the parallel celebration of the World Congress of Free Trade Zones, the MedaLogistics Summit, the AZFA Congress, the International AEO Congress, the eDelivery Congress and the SIL Congress itself.

During the announcement of this important news, the special delegate of the State in the CZFB and President of SIL, Pere Navarro, said that “SIL is the best possible setting in Europe to hold a congress of the importance and significance of ALACAT. We are very excited to be able to count on the presence of the most prominent professionals in the sector in Latin America in a very special edition for SIL as it is our 25th anniversary”. Navarro thanked “Moisés Solís, President of ALACAT, for all his efforts and support that have made this great agreement possible, as well as congratulating him on the great work he is doing at the head of the Federation, which this year celebrates its 40th anniversary”.

For her part, Blanca Sorigué, CEO at CZFB and SIL, explained that “it is great news to be able to hold a congress where European and Latin American logistics can feed off each other, establishing business and collaboration synergies”. Sorigué recalled that “we are very pleased that ALACAT has once again chosen SIL to hold its congress after the success of the editions held at SIL 2016 and 2019”.

About Consorci de la Zona Franca de Barcelona
The CZFB is a public company that is financed entirely from its own funds, such as the industrial leases of the Zona Franca industrial estate in Barcelona, and from its asset management. Although its main field of activity is the industrial estate and its customs free zone, it also promotes buildings, urban and industrial land, acts as a driving force for business transformation towards the 4.0 economy and organises events of economic interest for Barcelona such as the SIL logistics show or the BMP real estate show, as well as major benchmark events with an innovative format such as the Barcelona New Economy Week (BNEW) or the Barcelona Woman Acceleration Week (BWAW).

Its plenary has representatives from the Spanish government, Barcelona City Council, the Generalitat de
Catalunya and the city’s main economic entities.

About ALACAT
ALACAT is the Federation of National Associations of Freight Forwarders and International Logistics Operators of Latin America and the Caribbean. Founded on June 12, 1982. Conceived with the intention of achieving objectives and goals such as; the hierarchization of the activities of Freight Forwarders and
international logistics operators, the defence of the rights and interests of its members within the framework of the strictest commercial ethics and strict compliance with the legislation in force. The common interest of its founders in the development of international cargo, especially in the area covered by the Federation, in collaboration with national and international institutions for the improvement of transport and the improvement of its infrastructure. To strive for the facilitation of logistics processes, secure trade and the development of management systems that support operations by means of increasingly developed and reliable electronic systems. The training of personnel and the generation of new professionals has been and will continue to be a constant maxim of work and common interest. The central objectives of its activity are the reliability of its processes for exporters and importers and the control authorities in an area of growing competitiveness to ensure the productivity of their companies, allowing to improve day by day the trade, being aware of this challenge.