The European Patent Office (EPO) received nearly 166 000 European patent applications in 2017, an increase of +3.9% and an all-time high. Published today, the EPO’s Annual Report 2017 also shows that thanks to sustained efforts to boost quality and efficiency, the EPO published some 106 000  granted European patents  in 2017, up 10.1% on the previous year.

“In terms of patents, 2017 was a positive year for Europe,” said EPO President Benoît Battistelli. “The growing demand for European patents confirms Europe’s attractiveness as a leading technology market. European companies, too, filed for more patents than ever before – evidence of their strength in innovation, and of their confidence in our services. The EPO has successfully responded to the sustained demand with efficiency measures that have increased production, productivity, and timeliness. At the same time we have enhanced the quality of our products and services and continued to reduce the backlog of pending work. The EPO’s staff should be commended for their outstanding efforts in 2017, which led to the Office’s best results ever.”

Broad rise in demand for patents

Companies and inventors from all over the world continued to file large numbers of patent applications at the EPO. Applications originating from the EPO’s 38 member states grew by 2.8% in 2017 and accounted for 47% of the total. The five most active countries of origin in 2017 were the US, Germany, Japan, France and China, which posted another double-digit increase (+16.6%) and overtook Switzerland to make it into the top 5 for the first time. Japan, with 3.5% more applications in 2017, was up again after several years of declining figures. Growth was also back from the US (+5.8% in 2017) after a drop in applications in 2016, which had been a knock-on effect of changes in US patent law introduced in 2013. The main exception to the upward trend among the largest patent filing countries was the Republic of Korea, which saw applications drop -8.2% in 2017 after two consecutive years of increase. 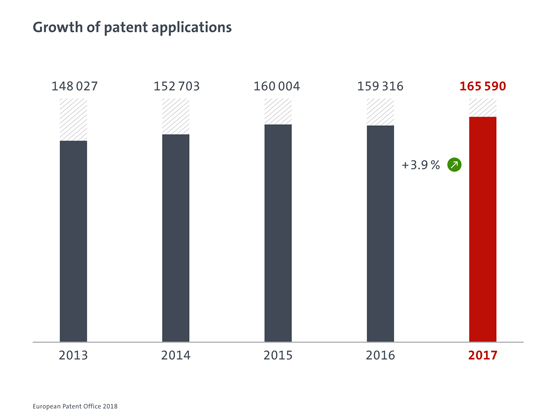 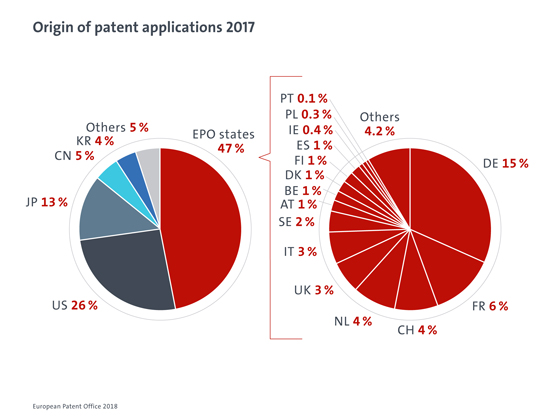 Swiss ahead in per capita ranking

As regards European patent applications filed relative to a country’s population, Switzerland again topped the ranking in 2017, with 884 applications per million inhabitants, followed by the Netherlands (412), Denmark (377), Sweden (374), and Finland (329). Once again, Japan (172) was the first non-European country in the list, in ninth place, remaining well above the EU average of 134.  A newcomer to the top 10, Israel (167), nudged ahead of France (157) into tenth place. (Fig.: Applications per mio. inhabitants).

Medical technology remains the field with the greatest number of patent applications at the EPO (up +6.2%), again followed by digital communication and computer technology. The strongest growth (of the top 10 fields) was recorded in biotechnology (+14.5%), followed by pharmaceuticals (+8.1%) and measurement (+6.6%). 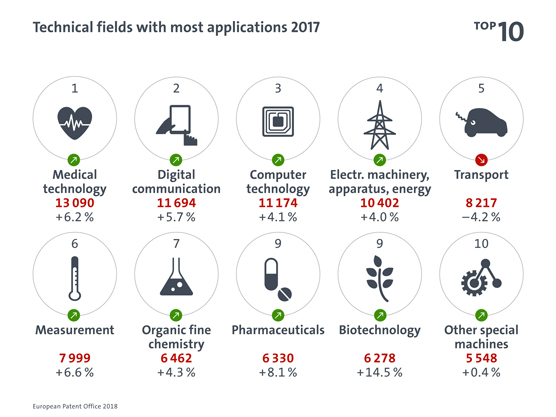 Europeans with a wide diversity of technologies

The analysis of the origin of patent applications in the largest fields of technologies shows that some countries such as China and South Korea are progressing strongly in specialised areas, in particular in the ICT field. Other economies, such as most EPO member states and the US and Japan, showed a greater diversity in applications across technical fields. This pattern is clearly reflected in a dedicated EPO patent landscaping study of technologies related to the fourth industrial revolution: European companies were found to be particularly well represented in key areas with a greater diversity, such as artificial intelligence and smart applications in vehicles, while Asian companies dominate in the ICT field.

For the first time in the history of the EPO, a Chinese company – Huawei – ranked first in the annual report for filing the most patent applications at the Office. Siemens moved up from sixth place to second, followed by LG, Samsung and Qualcomm. The top 10 list of applicants was made up of four companies from Europe, three from the US, two from South Korea and one from China. 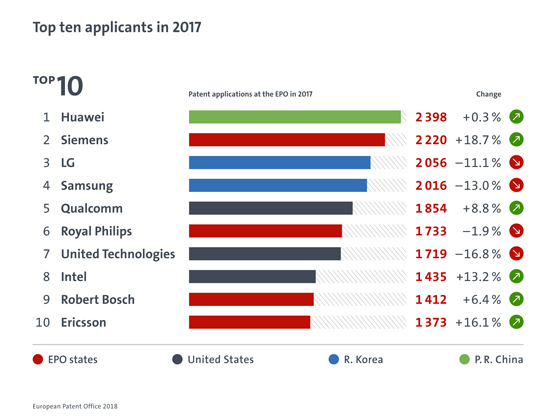 Every third application at the EPO from a smaller entity

A breakdown by category of applicants requesting services from the EPO in 2017 shows that while 69% of them were large companies, 31% were smaller entities,  comprising SMEs and individual inventors as well as universities and public research institutes.

In response to the increased workload, the EPO further boosted its productivity and production benefiting also from internal reforms put in place in recent years to improve quality and efficiency. The number of completed patent searches, substantive examinations and oppositions delivered by the EPO’s patent examiners grew by 4.6% in 2017 to reach a record total of more than 414 000 (2016: 396 000). Since 2015 the EPO has been completing more pending orders for products than it receives. As a result, the EPO managed to reduce its stock by 27%, in terms of months of pending work products, between January 2015 and December 2017.

As a result of these improvements, the EPO was also able to publish more than 105 600 granted European patents, an increase of 10.1% over 2016, and the highest number ever (2016: 95 900). The increase was also partly due to new working practices of expediting grants on applications which are already in good order at an early stage.

For detailed statistics, and a review of our activities in 2017, see the EPO’s Annual Report at: www.epo.org/annual-report2017