In the field of international business research, lobbying is considered a legitimate and legal political action conducted in a developed economy. Bribery, on the other hand, is seen as an outright corrupt practice in an emerging economy. 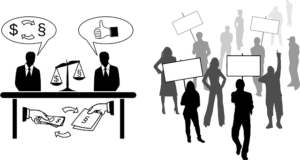 In a study published in the March issue of the journal Business & Society, a researcher from The University of Texas at Dallas examined the gray area between lobbying and bribery among multinational companies, especially in countries where lobbying is not regulated strongly or institutional development is insufficient.

The analysis found that firms based in developed countries, as opposed to developing countries or transition economies, are more likely to influence the institutional environment of host countries through lobbying, even when bribery is expected to be a more prevalent way of doing business in many of these countries.

“We wanted to address this and call for more attention to the issue of lobbying as an equally important issue as bribery in firm activities to influence the institutional environment in the international business context. For example, addressing institutional constraints overseas by shaping regulatory and policy environments in a more favorable way can increase performance benefits,” said study author Dr. Seung-Hyun Lee, professor of organizations, strategy and international management in the Naveen Jindal School of Management.

“Moreover, while bribery has been largely seen as what firms from transition economies do, there has been little discussion of the lobbying attempts that firms from more developed economies are doing. We wanted to shed light on this, too.”

In the study, Lee and co-author Dr. Jisun Yu of Concordia University in Montreal investigated what determines a multinational enterprise’s propensity to engage in lobbying and bribery in countries where the overall institutional development for market exchanges is insufficient and overall country governance is relatively weak.

A transition economy is one that endeavors to change from a planned economy to a market economy. Examples include China and Vietnam. For the study, the researchers focused on the transition economies of central and eastern European countries and members of the Commonwealth of Independent States, a regional organization of countries from the former Soviet Union.

“While transition economies are full of uncertainty due to structural transitions and the uneven development of adequate institutions, these very characteristics are also a source of opportunities, such as low-cost production, highly educated labor forces and easy access to the European market,” Lee said.

Using data from the Business Environment and Enterprise Performance Survey conducted in transition economy countries by the World Bank, the researchers aimed to further discussions concerning the ethical and social implications of corporate activities conducted to influence institutions.

Their analysis found that multinational enterprises based in a country with a strong governance system are less involved in bribery but have a higher tendency to lobby their hosts in transition-economy countries. The researchers found that this tendency holds true even when these enterprises rely on the host country’s local market for much of their sales.

The study also found that firms from a home country with more developed governance also attempt to change the laws to a greater extent in host countries with weaker institutional development.

“Multinational enterprises behave consistently in host countries and tend to stick to the way business was done in their domestic markets, even when dependence on local sales in host countries increases,” he said. “It is a good thing to find that multinational enterprises from countries with a stronger governance system are less likely to bribe in transition economies, compared to their counterparts with weaker governance.”

Lee said it is important for policymakers to understand that home country governance can be an effective mechanism in controlling a multinational enterprise’s illegal political activities, even outside its home boundaries.

“When it comes to host countries, governments there may want to make sure that lobbying is effectively governed and bribery is curbed to incentivize multinational enterprises hailing from stronger governance systems to invest in their countries,” he said.

Source: UNIVERSITY OF TEXAS AT DALLAS