What if we didn’t have skin? We would have no sense of touch, no detection of coldness or pain, leaving us inept to respond to any situation. The skin is not just a protective shell for organs, but rather a signaling system for survival that provides information on the external stimuli or temperature, or a meteorological observatory that reports the weather. Tactile receptors, tightly packed throughout the skin, feel the temperature or mechanical stimuli – such as touching or pinching – and convert them into electrical signals to the brain. 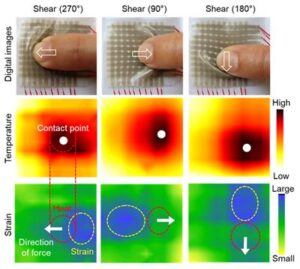 An image of recognition when the ion-electronic skin was pushed. The temperature change and direction of force in the part of contact are accurately recognized.
CREDIT
POSTECH

The challenge for electronic skin, being developed for use in artificial skins or humanlike robots like the humanoids, is to make it feel the temperatures and movements like how human skin feels them as much as possible. So far, there are electronic skins that can detect movement or temperature separately, but none are able to recognize both simultaneously like the human skin.

A joint research team consisting of POSTECH professor Unyong Jeong and Dr. Insang You of the Department of Materials Science and Engineering, and Professor Zhenan Bao of Stanford University have together developed the multimodal ion-electronic skin that can measure the temperature and mechanical stimulation at the same time. The research findings, published on November 20th edition of Science, are characterized by making very simple structures through applying special properties of the ion conductors.

There are various tactile receptors in the human skin that can detect hot or cold temperatures as well as other tactile sensations such as pinching, twisting or pushing. Through these receptors, humans can distinguish between the mechanical stimuli and temperature. The conventional electronic skin fabricated so far had the issue of having large errors in measuring temperature if mechanical stimuli were applied to the skin.

Human skin is freely stretchable yet unbreakable because it is full of electrolytes, so the joint research team made the sensor using them. They also took advantage of the fact that the ion conductor material containing electrolyte can have different measurable properties according to its measurement frequency. On the basis of the new finding, a multifunctional artificial receptor was created that can measure a tactile sensation and temperature at the same time.

In addition, the research team derived variables – the charge relaxation time and the normalized capacitance – that only respond to temperatures in ion conductors and variables that only respond to mechanical stimuli. The outputs of the variables could be obtained measuring at only two measurement frequencies. The charge relaxation time, which is the time it takes for the polarization of the ions to disappear, can measure temperature and does not respond to movements, and the normalized capacitance can measure the movements without responding to temperature.

This artificial receptor with a simple electrode-electrolyte-electrode structure has great commercialization potential and accurately measures the temperature of the object applied as well as the direction or strain profile upon external stimuli such as squeezing, pinching, spreading and twisting.

The multimodal ion-electronic skin, which can be freely stretched or modified but can also detect temperature, is anticipated to be applicable in wearable temperature sensors or in robot skins for humanlike robots like humanoids.

“When an index finger touches an electronic skin, the electronic skin detects contact as a temperature change, and when a finger pushes the skin, the back part of the contact area stretches and recognizes it as movement,” explained Dr. Insang You of POSTECH who is the first author of the paper. “I suspect that this mechanism is one of the ways that the actual human skin recognizes different stimuli like temperature and movement.”

“This study is the first step in opening the door for multimodal electronic skin research using electrolytes,” remarked Professor Unyong Jeong of POSTECH and the corresponding author. “The ultimate goal of this research is to create artificial ion-electronic skin that simulates human tactile receptors and neurotransmitters, which will help restore the sense of touch in patients who have lost their tactile sensation due to illness or accidents.”