Terahertz is a new technology in which nondestructive testing of components and surfaces is possible. Until now, these devices and, in particular, the sensor heads have been expensive and unwieldy. Researchers at Fraunhofer have now succeeded in making sensor heads more compact and, thus, cheaper, which facilitates their handling considerably. First prototypes are already being used for the production of plastic pipes. They are also very well suited for analyzing coatings of fiber composites. From April 25 to 29, 2016, these new sensor heads are being presented at the Hannover Messe (Hall 2, Stand C16/C22).

More than ten years ago, terahertz technology was the next big thing. Back then there was a lot of talk about ‚nude‘ body scanners. People thought that the devices that were being installed at airports were going to make revealing images of passengers. Moreover, scientists were hoping to develop measurement systems for material testing and inspection of components using terahertz radiation. Despite all these great expectations, the long-awaited breakthrough for terahertz technology did not come about. Compared to the conventional methods currently used for non-destructive testing, such as X-ray or ultrasound, terahertz technology is simply too expensive, unwieldy and overall impractical. 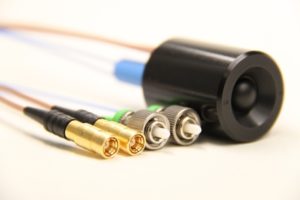 © Photo Fraunhofer HHI
The researchers at Fraunhofer have packaged the transmitting and receiving unit for terahertz radiation into a handy little sensor head with a diameter of only 25 and a length of 35 millimeters.

The latest developments of the Fraunhofer Institute for Telecommunication, Heinrich Hertz Institut, HHI in Berlin, could now give terahertz technology a decisive boost. The research team of Thorsten Göbel, who heads the Terahertz Research Group at HHI, has succeeded in developing terahertz devices that for the first time are made from standard and therefore low-cost components and are also relatively easy to handle. At the Hannover Messe, the experts will be presenting a terahertz measuring system with an innovative sensor head, which allows easy testing of various components, such as plastic tubes. The principle employed by Fraunhofer HHI for generating terahertz radiation is based on an optoelectronic method. Using a special semiconductor, laser light pulses are converted into electrical terahertz pulses that are only one billionth of a second long.

The reason for the lack of success of the terahertz technology until now is mainly due to the required properties of the semiconductors being used. These could only be achieved with materials that required an illumination with a wavelength of 800 nanometers. Both the terahertz system‘s laser and optical components are too expensive and not robust enough for industrial use when using this rather exotic wavelength.

“Therefore, we have developed a semiconductor that can be stimulated with a laser light centered around a wavelength of 1.5 micrometers,” says Göbel. “In optical communications, this wavelength is standard, which is why there is large number of inexpensive and high-quality optical components and lasers on the market.”

However, one obstacle needed to be overcome on the way to creating an affordable and handy terahertz system for testing materials. Until now, the sensor head for scanning components was too big and heavy for easy handling. The reason: the terahertz transmitter and the receiver were two separate components that had to be mounted in a casing with great effort and precision. The main disadvantage of this arrangement was that samples can only be measured at an angle. Therefore, the object had to be exactly in focus of the transmitter and receiver so that the terahertz signal sent from the transmitter via the sample could be displayed on the receiver. If the distance between the sensor head and the sample changes, for example due to vibrations, it becomes more difficult to measure.

The Fraunhofer HHI experts have solved this problem by manufacturing an integrated chip that can transmit and receive simultaneously. Now it is possible to use a single optical lens that focuses on the object, which allows for a flexible operating distance. The researchers packed this transmitting and receiving unit, the transceiver, into a handy little sensor head with a diameter of only 25 and a length of 35 millimeter. The device will be presented at the Hannover trade fair.

Moreover, these terahertz sensor system prototypes have been in use by manufacturers of plastic pipes for some time now. These sensors are directly used in the production line to monitor the thickness of the pipe walls. If the walls are too thin, the pipe becomes unstable. If they are too thick, valuable plastic is wasted. Up to now, the production of plastic pipes has been monitored using an ultrasound system. Since ultrasound cannot measure correctly in the air, water is needed. Similarly to the ultrasound gel doctors use, the water works as a coupling medium between the ultrasound sensor head and the pipe. Therefore, the nearly 250-degree Celsius pipes must be dragged through a water tank. In addition, the ultrasound technology also fails with so-called intelligent pipes that are constructed from a wide-range of layers of different materials.

Another future application is the verification of paints and coatings on fiber reinforced composite materials. Today, it is possible to use handy eddy current equipment on metallic substrates, such as sheet metal for the automotive industry. However, this method fails on poorly conducting fiber composites. “The need for a reliable measurement process is enormous,” says Göbel, “because the market for composite materials is growing in the automotive, aircraft and wind energy industries.”

Although the new terahertz sensor system is constructed from inexpensive standard optical components, it is currently more expensive than, for example, ultrasonic devices, which are manufactured in quantities of many hundreds of thousands. “However, the price will drop in the future when volume production starts picking up,” Göbel predicts. Given the advantages of the measuring method and the current advances, Göbel believes that the terahertz method will be successfully established in the coming years.