Cryocap™ is a technological innovation for CO2 capture using a cryogenic process (involving low temperatures, around -50°C, to separate gases) that is unique in the world. Cryocap™ can be adapted to specific applications combining a variety of Air Liquide technologies: the capture of CO2 produced by steel plants (Cryocap™ Steel), thermal power plants (Cryocap™ Oxy), or hydrogen production units (Cryocap™ H2).

Cryocap™ has resulted in the filing of several patents and illustrates the Air Liquide group’s innovation. Its installation in Port-Jérôme, Normandy, France, at the largest steam methane reforming hydrogen production unit operated by Air Liquide in France represents the first industrial deployment of the Cryocap™ H2 technology. Because Cryocap™ is located at the heart of the hydrogen production process – i.e. where the emissions are the most highly concentrated – it optimizes CO2 capture compared with conventional solutions, in particular the chemical process known as amine scrubbing capture. Today, Cryocap™ is the only technique that enables the reduction of the CO2 released during the production of hydrogen while also increasing this hydrogen production.

Towards the decarbonized production of hydrogen

The most common process for producing hydrogen is based on steam methane reforming, which involves a chemical reaction between natural gas, mostly composed of methane, and steam, which produces hydrogen and also releases CO2. Cryocap™H2 enables to capture a large portion of the CO2 that is released (from 60% to 90 %). It can be then liquefied and purified to be finally used to meet the CO2 needs of local industrial markets (agri-food, water treatment, etc.). This solution represents an important step toward the ultimate goal of producing decarbonized hydrogen.

Cryocap™ represents an investment for Air Liquide of around 30 million euros, decided in 2012. It also benefited from public financial support of close to 9 million euros, provided jointly by the Haute Normandie region, the community of Caux Vallée de Seine communes, and ADEME (French Environment and Energy Management Agency) through the Programme d’Investissement d’Avenir, a government program for investment for the future.

Air Liquide has chosen to invest in France. France constitutes a solid industrial base for the Group and also hosts one of its main research centers and one of its engineering centers. This geographic proximity of operations, researchers, and designers has allowed for fluid, optimal management of the project. Within France, Air Liquide has a strong ecosystem of innovation that involves 2,000 people and includes an R&D center, hubs of expertise, a laboratory for new ideas, the i-Lab, and ALIAD, the Group’s venture capital arm in innovative technology startups. In 2014, two-thirds of Air Liquide’s spending on innovation was done in France and additional investments of close to 100 million euros were decided to accelerate the pace of innovation in France.

1- The reaction between natural gas – essentially composed of methane (CH4) – and steam (H2O) requires high temperatures and occurs in a furnace. When it emerges from the reforming oven, the synthesis gas (called syngas) that is obtained, composed mainly of hydrogen (H2) and carbon monoxide (CO), is collected.

2- This syngas then undergoes a catalytic reaction called “shift” that produces a gas mixture that is mainly composed of hydrogen (H2) and carbon dioxide (CO2).

3- The gas mixture is then treated in a PSA[2] to produce pure hydrogen ready to be injected into the pipeline to supply the refinery. A waste gas which contents CO2 in high concentration and some hydrogen is also produced by the PSA.

4- This is where Cryocap™ H2 comes in to treat this waste gas and separate the CO2 from the additional hydrogen. Then the CO2 is purified to achieve food grade standard.

5- The CO2 is stored in its liquid form and later used to meet the need for continuous supply in certain industrial applications (for carbonating sparkling beverages, for freezing, for agricultural uses, etc.).

The Cryocap™ H2 installation in Port-Jérôme has an annual capture capacity of 100,000 tonnes of CO2. 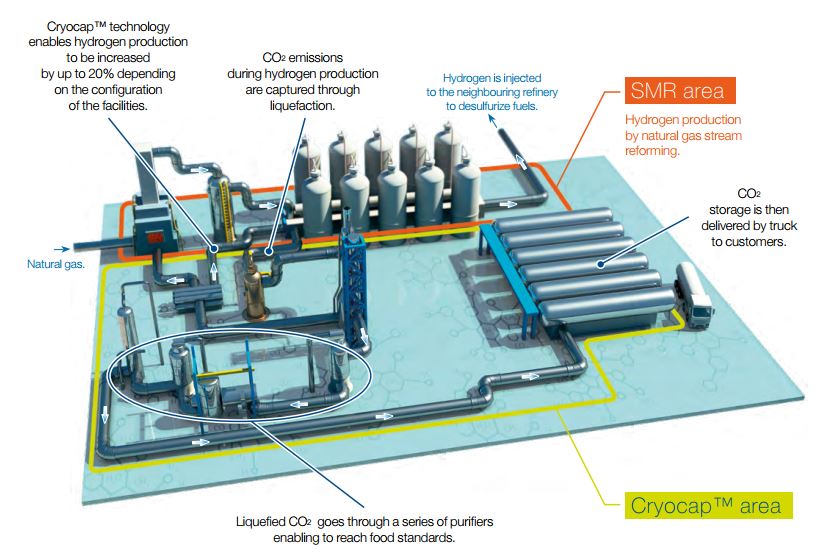 Cryocap™ H2 establishes a link between the traditional use of hydrogen – indispensable for producing clean fuels – and its emerging use to charge hydrogen-powered electric vehicles. In doing so, it is reinforcing the Air Liquide’s leadership in technologies designed to protect the environment.

World leader in gases, technologies and services for Industry and Health, Air Liquide is present in 80 countries with more than 50,000 employees and serves more than 2 million customers and patients. Oxygen, nitrogen and hydrogen have been at the core of the company’s activities since its creation in 1902. Air Liquide’s ambition is to be the leader in its industry, delivering long-term performance and acting responsibly.

Air Liquide ideas create value over the long term. At the core of the company’s development are the commitment and constant inventiveness of its people.