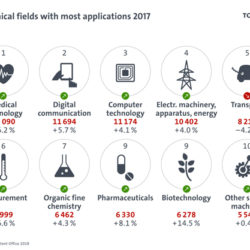 The European Patent Office (EPO) received nearly 166 000 European patent applications in 2017, an increase of +3.9% and an all-time high. Published today, the EPO’s Annual Report 2017 also shows that thanks to sustained efforts to boost quality and efficiency, the EPO published some 106 000  granted European patents  in 2017, up 10.1% on the previous Read more about The growing demand for European patents confirms Europe’s attractiveness as a leading technology market[…]