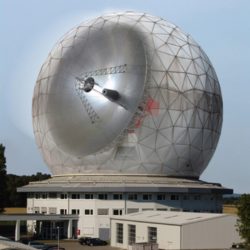 Uncontrollable flying objects in the Earth‘s orbit are an enormous risk for active satellites and for spacecraft in general. Since April 2012, the European environmental satellite ENVISAT has also been adrift in orbit. Now, the Fraun-hofer Institute for High Frequency Physics and Radar Techniques FHR has developed pioneering methods to precisely determine the attitude rotation Read more about The battle against dangerous space debris[…]